The Sacred Grove Is a Maze 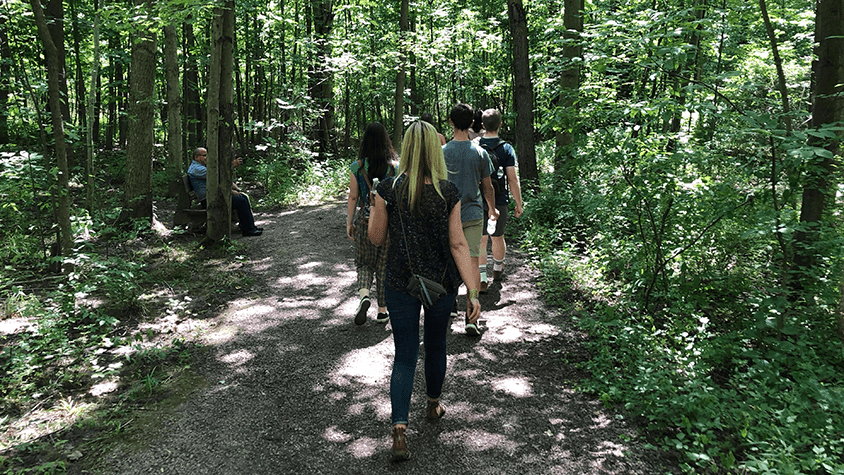 From a resurrected version of the Smith family log home, my family and I continue along a dirt path into the grove — a forest. It’s high summer. It’s humid. But thick green foliage absorbs the heat and scatters the light. We’re cool and other-worldly.

For a while, I think we haven’t yet reached our destination. The path curves through trees, past occasional well-spaced benches, some empty and others occupied. A woman, black and stout, walks slowly. As we pass, I hear her singing softly and strongly about Joseph Smith’s first vision.

Then we arrive at a fork in the path. Neither way appears to be marked. One appears to go deeper into the grove. The other seems to go roughly in the direction of another part of the Smith family homestead. Although winding out of sight, both are strait and narrow.

We walk the way deeper into the grove. And we soon discover more forks. No way appears to be marked. So although I’ll continue to wonder whether I might be wrong, I try to resign myself to the conclusion that we’ve already reached our destination.

We’re in the Sacred Grove. It has no obvious physical center. There’s no sign that identifies a spot where Joseph might have prayed. No monument. No guides. No stake in the ground to say, “Hitherto shalt thou come, and no further.”

I’m alienated. A few days ago, some relatively visible Mormons published an article that distorted my work, disparaged my character, and trivialized my faith. Is it Mormon? No. His work misrepresents Mormonism, they concluded. Is he malicious? No. His work is silly and dangerous, they observed. Prior to publication of their article, I had heard that it was coming. So I had offered, multiple times in multiple ways through multiple channels, to review their article for accuracy. They declined. These are my people.

I’m also inspired. A few days ago, my family and I reunited with my oldest son, who completed two years of service as a missionary for The Church of Jesus Christ of Latter-day Saints in Montreal, Canada. My wife and I both served missions in France. My mother served two missions, one in New York City and the other in Washington DC. My father served a mission in France. And before them, many of my ancestors served missions all over the world since their ancestors joined the small Church of Christ that Joseph organized in 1830. These are my people too.

Alienated and inspired, I find an empty bench somewhere in the grove. Maybe Joseph prayed somewhere nearby. Maybe not. Either way, I desire to pray here. So I sit. And I invite my family to sit.

I see the singing woman again, still walking slowly. Then I hear her again, still singing softly and strongly about Joseph’s first vision, as she passes. And then she’s winds away. We’re alone now in the soft green light.

I begin the prayer by pulling an iPhone from my pocket. My face becomes illuminated. Data pours down. Black words against a white background, I read aloud. My family’s hearts transcribe.

“… But, exerting all my powers to call upon God to deliver me out of the power of this enemy which had seized upon me, and at the very moment when I was ready to sink into despair and abandon myself to destruction — not to an imaginary ruin, but to the power of some actual being from the unseen world, who had such marvelous power as I had never before felt in any being — just at this moment of great alarm, I saw a pillar of light exactly over my head, above the brightness of the sun, which descended gradually until it fell upon me. …”

After our prayer, my family and I continue to walk through the grove. Occasionally, strait and narrow paths fork in various directions. Occasionally, the singing woman passes again. Through repeated encounters, I become acquainted with other faces, and some of their names. And some of them become acquainted with mine. So I gradually let them pass by the sentinels of my heart, and I feel as if they do the same for me.

That’s when I have my vision. I’m in the presence of God. The Sacred Grove is a maze. It’s not what I expected. But it’s perfect.