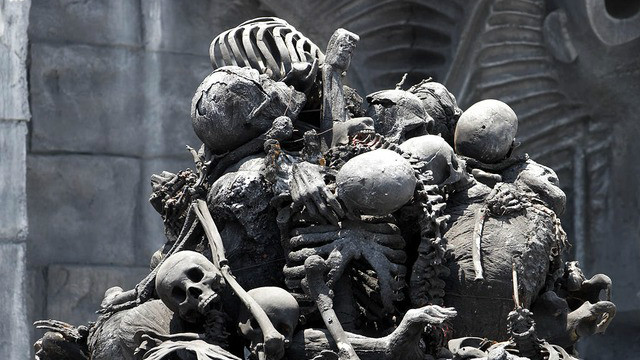 While searching for God, I saw in the distance a great crowd of persons, convulsing as if to implode. Wondering, I approached and saw them pushing, pulling, and climbing over each other, exerting an almost superhuman effort to move higher into the crowd. To my horror, I also saw what appeared to be innumerable corpses piled deep under their feet.

When I arrived at the edge of the crowd, several of the corpses murmured to me: “Come, we will bear you; come, rise above all on our backs.” Before I could reflect on the invitation, their arms pulled me inwards and upwards.

Into a foot, my face smashed. “Steady, good man,” came a voice from above. “Steady, while I rise. We can accomplish great things together. That’s the spirit!” Another foot planted on my back, and my nose turned to the corpses. Fearing for my life, I pushed, and as I pushed, the corpses below bore me inwards and upwards.

So I rose, sometimes motionless to stay below the fray of pullers and climbers, sometimes pushing to keep myself from sinking into the corpses, until I arrived high on the crowd.

There, at the top of the crowd, I found a God, a great laughing God, crowned with gold and draped in purple robes. Head tilted back and arms out-stretched, he cried triumphantly, “I am Pride! Behold my childlike love!” All the pushers, pullers, and climbers paused. All the corpses churned in ecstasy.

I averted my eyes, and called out for friends as the darkness of the crowd consumed me. In time, perhaps just in time, they came, and pulled me from the crowd into the light.