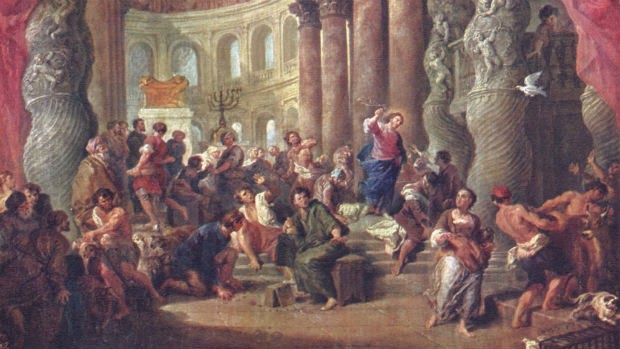 When it was almost time for the Jewish Passover, Jesus went up to Jerusalem and entered the temple courts. He found people selling cattle, sheep and doves, and others sitting at tables exchanging money. So he made a whip out of cords and drove all from the temple courts, both those who were buying and selling and the sheep and cattle. He overturned the tables and scattered the coins of the money changers, overturned the benches of those selling doves, and would not allow anyone to carry merchandise through the temple courts. He said to them, “Get these out of here! Stop turning my Father’s house into a market! It is written, ‘My house will be called a house of prayer for all nations’, but you have made it ‘a den of robbers’.”

This is a startling story that some Christians have used as an excuse for arrogance, masquerading as religious zealotry. Instead of giving the kingdom of heaven to the poor in spirit, some prescribe hell to the sorrowful. Instead of comforting those who mourn, some protest at soldier funerals. Rather than giving the earth to the meek, some are racist toward immigrants. Rather than filling those who hunger for righteousness, some evoke fears of communism. Instead of being merciful, some bomb abortion clinics. Instead of inviting the pure in heart to see God, some demonize atheists. Rather than recognizing peacemakers as children of God, some ridicule pacifists as weaklings.

Ironically, the only times that the Bible describes Jesus as zealous are when he confronts religious arrogance. In the temple courts, Jesus charges the money changers with robbery because they make it difficult for the poor to participate in religious ceremonies. Likewise, Jesus saves his sharpest criticisms for religious authorities that make burdens for others or do not share in others’ burdens, that like to call attention to their authority by how they dress or pray or the titles others use to address them, that impose dogmas to restrain others from spiritual progress and make them worse than they were before converting, that expect the poor to give all without adequately returning justice or mercy, and that generally make a big deal out of unimportant things while ignoring important things. Jesus calls such abusers of religious authority “hypocrites”, “children of hell”, “fools”, “blind guides”, “serpents” and “vipers”, and questions whether they can escape the damnation of hell.

As Mormons, we’ve heard Jesus’ rebuke of religious arrogance repeated and emphasized, particularly when we’re aiming it at ourselves. Often we’ve used the word “pride” to describe this arrogance. In 1989, President Ezra Taft Benson declared, “Pride is the great stumbling block to Zion. I repeat: pride is the great stumbling block to Zion.” In 2010, Elder Dieter Uchtdorf echoed, “Pride is a switch that turns off priesthood power. Humility is a switch that turns it on.” These messages were not delivered in speeches at secular gatherings or published during press conferences to the world. They were spoken to us, in general conference sessions of the Church of Jesus Christ of Latter-day Saints, who claim priesthood authority and aspire to be called “Zion”.

President Benson reminded us that one of the major messages of the Book of Mormon is a warning against arrogance. Consider the egotistical testimonies that the Zoramites deliver from the Rameumptom, thanking God that they’re better than others while barring the poor from their synagogues. Think of King Noah’s pretense to teaching the Law of Moses while engaging in prostitution and murder, and requiring his followers to betray their families. Perhaps the most poignant example is when Alma charges his son with a sin next to murder. Some attribute this to his son’s sexual promiscuity, but careful study of the text reveals the gravity of Alma’s charge reflects his son’s boasting breech of religious trust that distracts others from listening to the gospel of Christ.

The Doctrine and Covenants also warns us against religious arrogance, lest we “become as the Nephites”. In the 121st section, Joseph Smith observes, “We have learned by sad experience that it is the nature and disposition of almost all … as soon as they get a little authority, as they suppose, they will immediately begin to exercise unrighteous dominion.” He explains further that, although the church may give us authority, we quickly lose power when we try to cover our sins, gratify our pride or vain ambition, or exercise control or dominion or compulsion on others. The 78th section further advises us that we will not get a place in the celestial world unless we prepare ourselves by organizing the people to look after the poor and become equal in earthly things.

Similar warnings against religious arrogance are found throughout the Old Testament. Consider the infamous Sodom and Gomorrah, which prophets reference repeatedly as examples of wickedness. Popular culture assigns sexual deviance as their sin, but Ezekiel explains:

“Now this was the sin of … Sodom: She and her daughters were arrogant, overfed and unconcerned; they did not help the poor and needy. They were haughty and did detestable things …”

Likewise, the first chapter of Isaiah compares Israel to Sodom and Gomorrah because of their religious arrogance:

“Hear the word of the LORD, you rulers of Sodom; listen to the instruction of our God, you people of Gomorrah! … When you come to appear before me, who has asked this of you, this trampling of my courts? Stop bringing meaningless offerings! Your incense is detestable to me. New Moons, Sabbaths and convocations – I cannot bear your worthless assemblies. Your New Moon feasts and your appointed festivals I hate with all my being. They have become a burden to me; I am weary of bearing them. When you spread out your hands in prayer, I hide my eyes from you; even when you offer many prayers, I am not listening. Your hands are full of blood! Wash and make yourselves clean. Take your evil deeds out of my sight; stop doing wrong. Learn to do right; seek justice. Defend the oppressed. Take up the cause of the fatherless; plead the case of the widow.”

Isaiah’s criticism of Israel’s religious arrogance is also applicable to us as a modern Israel. The Book of Mormon quotes no other writer more often than Isaiah, and reminds us to apply his message to ourselves. Even Jesus, speaking in the third book of Nephi, commends Isaiah and commands us to search his writings, which returns us to contemplation of Jesus’ example.

Brothers and sisters, and fellow Christians, are we following Jesus’ example? Are we doing so in word only or also in deed? Are we channeling our zeal at defeating our own tendencies to religious arrogance? Are we interpreting our religion in ways that create psychological and social burdens for our fellows, or are we relieving such burdens? Is our religiosity a show for egotistical political gain, or does it actually reflect a liberal charity? Do we seek to raise ourselves above others, or do we seek each other to rise together? Do we preach a God of oppression or love? Do we care more for money than the virtues that make possible its value? Do we care more for scriptural syntax than for the spirit of God? Can we still feel the forth-telling of prophets?

“It’s so good that you talk about things you know so much about,” smiled Elder Uchtdorf’s wife when she learned he would speak on “Pride and the Priesthood”. We all smiled with her, whether we’re in the First Presidency or a deacons quorum presidency, and particularly if we work in the office of the ward clerk, because we know, indeed, that each of us has at least a casual if not intimate relationship with the sin of religious arrogance. So thank you for indulging me as I’ve rehearsed the warnings we know so well. May God bless us always to remember the divine grace that sustains us, as well as our need for each other in our common goal of making a better world, worthy to be called “Zion”.