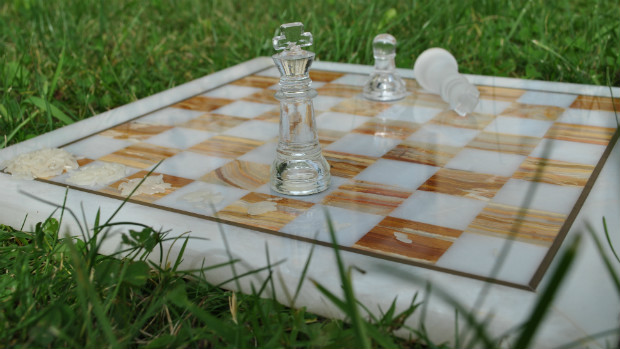 Regularly, in both professional and personal settings, I have the opportunity to discuss accelerating technological change. For the most part, the persons I talk with have heard of Moore’s Law and agree that technology is advancing rapidly. But few demonstrate an appreciation of the ramifications. Often, in a single sentence, they’ll tell me both that they understand that tech is changing rapidly and that they don’t expect the change will have many practical consequences for their business or personal lives within the next decade.

Most of us are comfortable anticipating a rate of change that reflects our past experience. But that’s almost certainly poor planning. Our intuitive assessment of the extent that technology will change is almost certainly wrong.

To communicate this, I often tell the following story (which I probably stole from Ray Kurzweil or some other futurist, who probably stole it from someone else):

There was once a Sage who provided great service to a kingdom. The King called the Sage to court and told her that he would like to provide a reward for her service. He asked what she desired and told her he would grant her desire, if possible. The Sage thought for a moment. Then, she gestured at a chess board nearby and proposed the following:

“Your highness, if it be your will, I ask for rice, the amount to be determined by placing one grain on the first square of the chess board, two grains on the second square, four on the third, and so on doubling the number of grains on each subsequent square until a number of rice grains has been allocated for each of the 64 squares of the chess board.”

The King was surprised and asked the Sage if she desired nothing more. The Sage confirmed her request and assured the King she would feel more than adequately rewarded if he could grant her request. So the King decreed that the Sage should receive according to her desires and commended his servants to begin allocating rice grains to the squares on the chess board.

At this point, I ask the person to whom I’m telling the story to estimate how much space the requested rice would fill. Think about it now. Make your best guess, based just on intuition without doing any formal math. How much space would the Sage’s rice fill?

… really. Think about it and make your best guess. Type it or write it down before you continue reading. It will reveal something to you. When you’re ready, scroll down for the answer.

… okay. I hope you typed or wrote your guess. Here are some guesses that I’ve recently heard from friends or colleagues and that typify the kinds of guesses generally evoked by the story:

“a whole bag of rice”

“the rice would fill the whole room”

The Sage’s rice would cover the entire planet in rice to a depth of more than a half kilometer!

Let’s assume a rice grain, when positioned horizontally, has a height of .4cm and a footprint of 1cm x .4cm or .4cm^2.

If you’re like the rest of us, your guess was WAY off - many orders of magnitude off. We simply do not intuitively understand the ramifications of exponential mathematics, as reflected in Moore’s Law and other aspects of accelerating technological change. When we learn this about ourselves, how should we change the way we plan for the future?