John 3: 16 from a Mormon Perspective 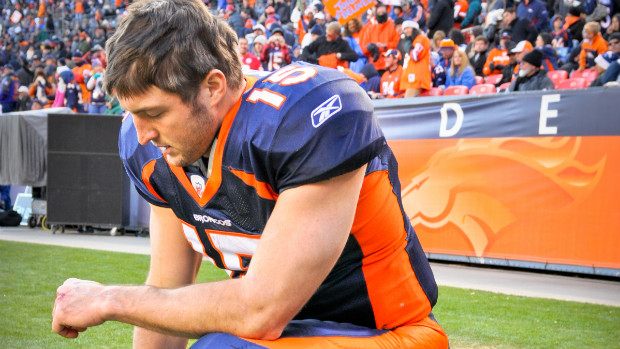 Sports news media and google searchers are presently giving the Biblical passage at John 3: 16 a lot of attention because Tim Tebow, an American football player known for advocating Christianity by displaying references to “John 3: 16”, recently led the Denver Broncos to victory over the Pittsburgh Steelers by passing for 316 yards and averaging 31.6 yards per completion. Do you see it? “John 3: 16”, “316 yards”, and “31.6 yards per completion”: the statistics would appear to point at Tim’s favorite reference, as if by divine intervention.

Here’s how the passage reads in the King James Version of the Bible: “For God so loved the world, that he gave his only begotten Son, that whosoever believeth in him should not perish, but have everlasting life.” Many Christians, including some Mormons, interpret this passage to indicate a hard distinction between our own nature and capacity and that of Jesus. On the one hand, Jesus is the “only begotten Son” of God, whereas (the assumed implication goes) we’re not begotten sons or daughters of God.

However, other passages of the Bible, particularly those that teach theosis, undermine such an interpretation, as do the teachings of many early Christian authorities on theosis. Of particular note is John 17: 22, where Jesus says, “I’ve given others the glory you gave me, that they may be one as we are one.” Here, Jesus invites us to participate in his glory, the glory of Christ, not partially, but together as one with him, making us all together the only begotten of God. In Mormon scripture, Doctrine and Covenants 76: 24 makes this even more explicit: “That by him, and through him, and of him, the worlds are and were created, and the inhabitants thereof are begotten sons and daughters unto God.”

A common will and work of taking on the identity of Christ, serving and suffering for others, for the sake of a better world beyond present notions of suffering and death, is Jesus’ central message, and essential to my Christian identity. We, together, should be that child of God, maturing to Godhood according to the nurturing grace afforded us.