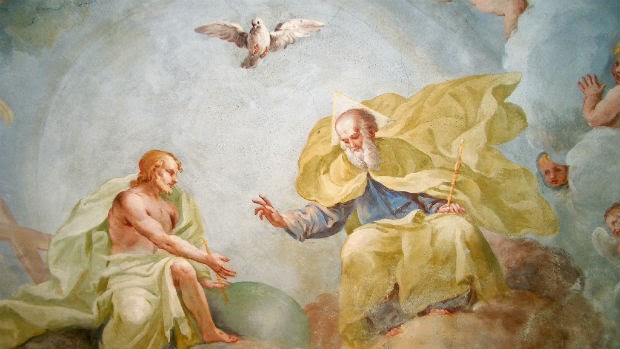 “Why does the Holy Ghost not have a body?” Someone raised this question in my son’s class during church meetings. And the instructor asked the students to think about it at home during the week.

Some of us are repulsed by such questions, either because we consider all theology to be a waste of time or because we consider speculation to be spiritually dangerous. Although I agree that speculative theology (is there any other kind?) presents the risk of superstition, I generally value and enjoy it for the opportunity it presents as an illuminator of our posthuman projections.

The question raised in my son’s class is no exception. So I share with you some of the thoughts I shared with my son.

Mormons, however, have not adopted the creed. We still describe the Godhead in terms of “the Father, the Son and the Holy Ghost.” But most of us consider the Godhead to consist of three (or more, as I’ll contend) distinct beings. This reflects ideas in Mormon scripture such as the following, which inspired the question in my son’s class:

Consequently, you might think Mormon scripture, compared to the Bible, would downplay the unity of the Godhead. However, it does exactly the opposite, generally emphasizing unity even more. Here are three examples from the Book of Mormon:

“sing ceaseless praises with the choirs above, unto the Father, and unto the Son, and unto the Holy Ghost, which are one God” (Mormon 7: 7)

“every thing shall be restored to its perfect frame, as it is now, or in the body, and shall be brought and be arraigned before the bar of Christ the Son, and God the Father, and the Holy Spirit, which is one Eternal God” (Alma 11: 44)

In addition to emphasizing the unity of the Godhead in terms of “the Father, the Son, and the Holy Ghost,” Mormon scriptures strongly associate the united Godhead with Jesus individually. They explicitly identify Jesus as the Eternal God (2 Nephi 26: 12), as well as the Father and the Son (Mormon 9: 12). The Book of Mormon even goes so far as to state its purpose to be “the convincing of the Jew and Gentile that Jesus is the Christ, the Eternal God” (title page).

Most Mormons will tell you that God is one in purpose and many in person. Although three distinct beings, the Father, the Son, and the Holy Ghost work together, we say. I like that, so far as it goes, particularly when we combine it with the doctrine of theosis.

As Jesus is one with God, so we should be one with God (D&C 132: 20), that all may be perfect in one (John 17: 21-23), or in other words that all may be atoned. Although many in person, God is one in purpose. Again, I like this so far as it goes. It idealizes unity among persons without resorting to the nihilistic escapism of disembodiment, immaterialism, or supernaturalism.

The scriptures, however, go farther. In the Bible, Jesus teaches us to be immersed in the Father, the Son, and the Holy Ghost (Matthew 28: 19). Echoing the Bible, the Book of Mormon teaches us to immerse ourselves in the one God (3 Nephi 11: 25-27), which the Doctrine and Covenants describes as “infinite and eternal, without end” (D&C 20: 28).

By implication, the Holy Ghost is premortal or even prehuman Godhood, or the beginning of spiritual Godhood. Any number of persons can be one in the Holy Ghost. Jesus invites us to follow his example of having been the Holy Ghost.

What does it mean to have been the Holy Ghost?

When we think of becoming God the Father, we trust in and work toward a sublime future of radical creativity and compassion beyond human abilities, spiritual and physical. We set our future apart as holy and even divine.

When we think of being Christ the Son, we speak and act in a sublime present. We would follow Jesus’ example of love and imitate his sacrifice through forgiving and helping each other. We make our present divine.

Accordingly, when we think of having been the Holy Ghost, we make the past divine. This reflects scriptures that describe our past as that of the “church of the Firstborn,” “in the beginning with the Father,” uncreated intelligence, and “the light of truth” (D&C 93: 21-40). We raise our esteem and reverence for our past, to strengthen our trust in present capacity, thereby to facilitate and expedite our sublime future. If we are the children of God, we are reassured of our capacity to become as our parents.

The Holy Ghost is prehuman Godhood. We should have been the Holy Ghost. It should be descriptive of our spiritual beginnings, as individuals and as a species.

We should revere our origins as sublime. And this esthetic should abide with us, inspire us, and even provoke us. It should strengthen our trust in Christ the Son and God the Father, our present and future as they should be.

Among Mormons, we sometimes remind each other to beware the philosophies of men. I understand this as a warning against any Humanism that would condemn us in present limitation. In its stead, may we embrace the philosophies of Gods. I understand this as a Transhumanism that would inspire us with a sublime past and provoke us to a sublime future of radical flourishing in creativity and compassion.

May we realize our posthuman projections so that it will be said of us, as it was written of Jesus, that in us dwells the fullness of Godhead bodily (Colossians 2: 6-12).