Do I want to be a robot? 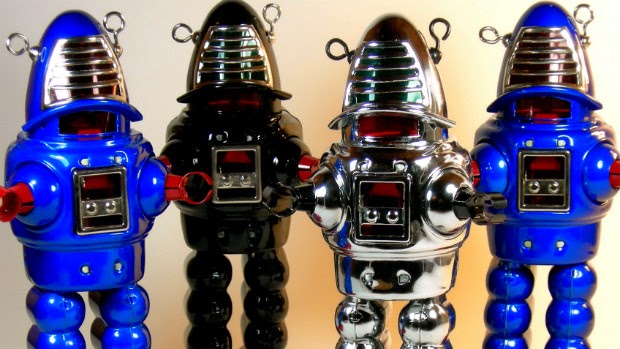 Is it possible to make a fully functional artificial neuron? If so, would I necessarily lose or degrade the kind of consciousness I now experience (already punctuated by anesthesia, sleep and other lapses) if I were to replace one of my biological neurons with an artificial neuron? Would I necessarily lose or degrade consciousness if I were to replace my biological neurons with artificial neurons one at a time until they’re all replaced? I don’t know of any reason to conclude on such a necessity, and by implication I’m open to the possibility of moving my mind from one computational substrate to another.

Identity is complex, constructed by ourselves and others, impinged upon by our anatomies and environments, but it can withstand some rates and degrees of change. If it’s possible to engineer artificial brains, I don’t know of any reason to conclude we could not engineer them to function well within the parameters of practically-acceptable rates and degrees of change, and thereby apply them while preserving identity.

As I understand them, the Mormon conceptions of spirit and spirit bodies are perfectly compatible with the hypothesis of substrate independent minds, and seem even to demand such a hypothesis. In our scriptures, we read that spirit is material, and it’s associated with light. The scriptures also include the paradoxical notions that, in one sense, our spirits have existed forever, and in another sense, our spirits were created by God.

To make sense of these ideas within the context of contemporary science and technological trends, I’ve come to think of spirit as information and spirit bodies as information organized into patterns of increasing complexity. Accordingly, spirit bodies, minds or consciousness would be information experiencing itself from the inside.

When we talk about humans becoming more robotic or robots becoming more human, our language uses a dichotomy that is increasingly insufficient for describing not only the possibility space, but even the actuality space. Does a human receiving a prosthetic limb or an artificial heart become less human? Can a body originating from artificial DNA, conceived via an artificial process, or gestated in an artificial environment ever be human, even if it’s eventually indistinguishable from a natural human? For that matter, how natural are the humans we actually know? Are agriculture and medicine natural?

The blurring between natural and artificial is as ancient as the stick our distant ancestor wielded to extend her reach, and the leaves donned to enhance his skin. In an important sense, a synthesis of anatomy and tools made us human, empowering us above and differentiating us from our prehuman ancestors. In that sense, perhaps we’ve always been robots, for at least as long as we’ve been humans. Of course, when we think of robots, most of us usually think of cold metal or hollow plastic. If that’s what robots are then we aren’t and never should (or could) be robots.

Why would we want to enhance ourselves? The answer is not new. We would want to enhance ourselves for all the reasons we’ve made tools since the beginning of history. Tools empower us. So we’ll continue to build more and better tools, and their synthesis with our anatomies will become increasingly seamless and intimate, because we want to and because we can, for the power it provides.

Like all power, tools and their intimate evolution into bodily enhancements are not inherently good or evil. Rather, they are both risks to mitigate and opportunities to pursue according to whatever wisdom and inspiration we might have.

On the one hand, tools can empower us against each other. Some hoard, and others deplete. Elites form, totalitarians control, and anarchists revolt. Artificial catastrophic risks well beyond those of nuclear weapons present themselves. Perhaps we could realize the worst interpretations of the Apocalypse.

On the other hand, tools can also empower us for each other. Already we’ve used them to build, relate, console and heal in ways our distant ancestors imagined only Gods to have the capacity. Perhaps someday we’ll find ourselves transfigured, as suggested in the Bible and throughout Mormon scripture, into ageless bodies with sublime minds that are capable of relating to each other with unfathomable compassion and conceiving thoughts that in themselves constitute nothing less than the creation of new worlds.