PZ Myers Is Skeptical About Transhumanism 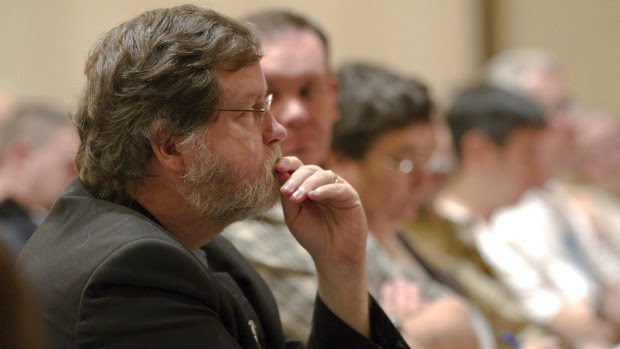 PZ Myers is a biologist, a self-described skeptic, and apparently an anti-religious zealot. He recently caught my attention because he spoke about Transhumanism at the Skeptech conference and mentioned Mormon Transhumanism. After gracing me with some “kind” interactions on Twitter, he posted a video of his presentation. Here are some quick observations and thoughts that I wrote while watching.

The beginning of PZ’s presentation suggests that his knowledge of Transhumanism is dated. He references the Extropy Institute (closed since 2006) and the World Transhumanist Association (renamed Humanity+ since 2008). He also displays a list of science fiction authors that address Transhumanism, and the list omits one of the most notable, Charles Stross, who authored Accelerando in 2006. He may have recycled an old presentation based on a cursory examination of Transhumanism from a decade ago.

His first criticism of Transhumanism is that its goals don’t make any sense. Presumably he’s talking about Transhumanists’ aspiration to posthumanity. He proceeds to frame that aspiration in terms of biological evolution. And he criticizes it, saying: “With evolution you get change, but it’s not linear. You can’t predict what’s going to come next. That’s one important thing, and it’s also a really peculiar thing to endorse.”

There are at least three problems with this framing and criticism. First, most Transhumanists don’t merely aspire to any arbitrary posthuman evolution, but rather advocate directed change that corresponds with whatever values inform our particular forms of Transhumanism. Second, most Transhumanists don’t think biological evolution should proceed merely as it has operated historically, but rather that we should inject ourselves volitionally into the process. Third, his claim that evolution cannot be predicted seems to have become increasingly controversial among professional biologists, some of whom make the case that knowledge of environment can provide predictability of evolution and control of environment can provide control of evolution.

PZ compares Transhumanists to Neanderthals speculating about their evolutionary future. The analogy is weak for at least a couple reasons.

First, Neanderthals did not have a theory of evolution. Probably the closest they came to projecting changes to their nature, implicitly but only ignorantly, was through highly primitive God concepts. The theory of evolution provides a framework that makes the next weakness in PZ’s analogy even more important.

Second, Neanderthals did not have or even foresee technological interventions into biology of the magnitudes we already take for granted. And I imagine the closest they came to this was through crude tools for warfare and ritual. Without a conceptual framework for understanding biological change or tools to inject their interests into that change, Neanderthals are hardly useful as an analogy.

Humans did not clearly recognize the cognitive and biological feedback loops on which Transhumanism depends until quite recently in our history. Awareness of change and potential for directing it (rather than the mere fact of change) is essential to Transhumanism.

I would agree with PZ that the primitive beginnings of Transhumanism could be found in Neanderthals. And such has always manifest in evolving humanity. But I don’t see how the analogy provides useful insight. Rather, I see mostly that it serves to denigrate, as PZ is fond of doing.

PZ says Transhumanists are generally focused on anagenesis or gradual evolution rather than peripatric or sympatric evolution that results in abrupt change. And he repeats the criticism that we don’t get to choose which direction evolution will proceed. This criticism reveals again that PZ has a shallow familiarity with Transhumanism, within which there are many varieties (which he does later acknowledge without recognizing how this weakens his earlier criticism). Some varieties focus on the risks associated with abrupt evolutionary change.

Of course there are Transhumanists that suppose positive gradual change is inevitable. But most of us recognize both risks and opportunities associated with emerging technology and its relation with our evolution. Transhumanism is not merely technological cheerleading. It’s about both the pursuit of opportunities and the mitigation of risks, neither of which we can do perfectly, but both of which we can do better, particularly as our knowledge and tools continue to improve.

PZ says those with the best technology don’t always win. Strictly speaking, he’s right of course. But does that mean we should resign ourselves to doing nothing, refraining from using our tools or planning how to use them?

I suspect PZ visits doctors. He probably pays his bills and makes investments. He might even engage with some degree of respect toward persons he judges to have influence over his career, etc.

In other words, PZ probably plans for the future and uses tools to help him do that, like most of us. That’s because planning and tool-using seem like good ways of tipping the odds in his favor. That doesn’t mean his future will turn out exactly as he hopes. But injecting his effort into shaping his future does seem to have some desired practical consequences.

Transhumanists claim the same is true, and perhaps urgently so, of our efforts to plan for and use emerging technology. We wouldn’t care so much if we thought our evolutionary destiny to be either entirely certain or entirely predictable. We care because it’s uncertain and yet perhaps increasingly shapeable.

PZ mentions Mormon Transhumanism. Here’s the quote, as best I could understand it through the laughter:

PZ criticizes cryonics for being too optimistic about both the generosity and capabilities of future persons. He’s a skeptic after all. When in doubt, be as pessimistic as possible.

It’s odd, though, that he emphasizes the difficulty of reattaching preserved heads to new bodies. That suggests he doesn’t understand prevailing theories behind the utility of cryonics.

He goes on to compare cryonics advocacy to Pascal’s wager (after prompting the audience for the obligatory ritual denigration of poor Pascal). And he points out the world doesn’t work that way. Of course he’s right, but of course he can’t resist characterizing Transhumanists broadly as ignorant of his sophomoric observation.

To PZ’s credit, he goes on to talk about some of the science behind cryonics, showing that some limited practical preservation has been achieved. But he finishes the subject with a startlingly confident prediction that “if you’re freezing your head right now with technology from the 21st century, you are irrevocably destroying all the cells in your brain, and there’s no technology in the future that’s going to recover them.” I wonder if those Neanderthals he mentioned were as confident about what future technology would prove incapable of recovering?

PZ moves on to criticizing and equivocating (already problematic) immortalism and rejuvenation. He points out life expectancy is going up primarily because we’re increasing the number of persons that live long enough to die of aging – rather than from violence or accidents.

I’m not an expert in this field. But I’ll happily point out that doing something “impossible” usually starts with someone who decides that it might not be impossible. In this case, given the opportunities presented to us if we can find a cure for cancer and aging, I’d certainly rather be wrong than not try.

PZ, on the other hand, is a skeptic. That’s his thing. I’m all for the utility of doubt as a complement to trust, but actually identifying as a skeptic is precisely the opposite of my inclination. While I’d prefer to be right, I’d rather aspire to too much than too little when operating beyond the bounds of my knowledge, because of the practical consequences of aspiration.

Next, PZ takes up the subject of uploading – moving minds from biological to other bodies or substrates. He shows one Transhumanist group’s prediction of the timeline for achieving such technology. And he criticizes it (predictably) primarily through appeals to ridicule rather than to evidence.

He then criticizes a particular method some Transhumanists have proposed for reconstructing brain function. And he generalizes that “Transhumanists are stuck on a very primitive simple approach.” While his particular criticism is probably accurate, his general conclusion is not.

Transhumanists are plainly interested in improving (not merely remaining with any current) understanding of how the brain works and how its functions may be replicated in other substrates. And yet, of course, none of us knows enough about the these things to satisfy our interests or enable our loosely hypothesized applications. Brain science continues to make exciting advances, and investments continue to fuel the research. We’re certainly in for some surprises, whether we’re skeptics or not.

Finally, he criticizes the Technological Singularity, particularly as presented by Ray Kurzweil. As usual, his criticism is mostly an appeal to ridicule. And this time it’s quite short: Kurzweil picked historic events to show a trajectory that he wanted to show. And he’s leveraging religious paradigms – nothing could be more ridiculous than that!

Perhaps due to time constraints, PZ pretty much ignores most of the evidence Kurzweil offers. I happen to be skeptical of the Singularitarian timeline myself. But I don’t think we should be dismissive of it, for reasons I won’t take time to explore here.

To summarize, PZ’s argument against Transhumanism is that Transhumanists are ignorant of impossibilities and sometimes ridiculous. There’s nothing novel in this criticism. I wonder what PZ thinks of Clarke’s First Law. Maybe he has something in common with these skeptics.