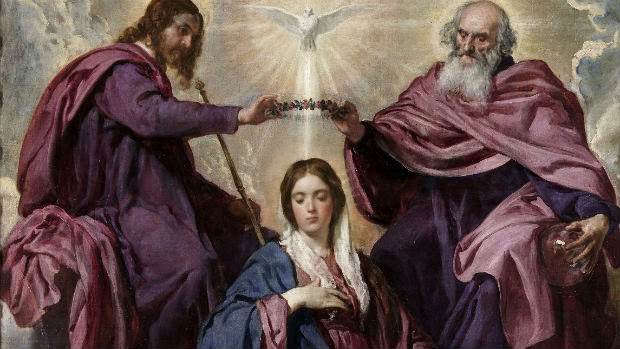 If you would, think with me for a moment about everyone in the room with us. If you’re comfortable, you might even look around. Some are mothers, some hope to be mothers, some have lost hope to be mothers, some live with our mothers, and some don’t remember our mothers. For some, our mothers are a biological fact, and for some, our mothers are so by adoption, maybe by law or simply in function. Perhaps most challenging, the idea of motherhood may warm our hearts or it may chill our bones. Because our life experiences have been different, we each understand and feel motherhood differently. While honoring these differences, my task today yet remains to speak on honoring motherhood.

We know, of course, even the primary children among us, that the maxim to honor motherhood is at least as old as the Ten Commandments that we read about in the Bible: “Honor your father and your mother, so that you may live long in the land God gives you.” It’s expressed in such practical terms. If we honor our parents then we may live longer and better. Why is that? How could honoring our mothers help us live longer and better? Is it just a threat – she brought you into this world, and she can take you out – or is it a promise of something more? If it’s a promise, is it only for those lucky enough to have good mothers, or is it a promise to all of us? I’d like to explore the possibility that it’s a promise to all of us: whether we think we have good mothers or not, honoring our mothers may help us live longer and better. Let’s begin the exploration with some stories about mothers from the scriptures.

In the Book of Revelation, we read of a woman clothed with the sun, with the moon under her feet and a crown of twelve stars on her head. She’s pregnant and cries out in pain as she’s about to give birth. We also read of an enormous red dragon with seven heads and ten horns and seven crowns on its heads. Its tail sweeps a third of the stars out of the sky and flings them to the earth. The dragon waits for the woman to give birth, so that it might devour her child the moment it’s born; but when she gives birth, the child’s snatched up to God, and the woman flees.

Then war breaks out in heaven. God and angels fight against the dragon, and the dragon and its demons fight back. But they’re not strong enough, and they lose their place in heaven. The great dragon’s hurled down to the earth, and its demons with it.

When the dragon sees that it’s been hurled to the earth, it pursues the woman who’d given birth to the child. The woman is given two wings of a great eagle, so she can fly out of the dragon’s reach. Then from its mouth the dragon spews water like a river, to overtake the woman and sweep her away with the torrent; but the earth helps the woman by opening its mouth and swallowing the river. Then the dragon’s enraged at the woman and goes off to wage war against the rest of her children.

The Mother of All Life

In the Book of Genesis, we read of a women who would be the mother of all life. We also read of a garden and a serpent more crafty than any other animal God had made. It says to the woman, “Did God really say, ‘You must not eat from any tree in the garden’?”

“You will not certainly die,” the serpent says to the woman. “God knows that when you eat from it your eyes will be opened, and you will be like God, knowing good and evil.”

When the woman sees that the fruit of the tree is good for food and pleasing to the eye, and also desirable for gaining wisdom, she takes some and eats it. She also gives some to her husband, who’s with her, and he eats it. Then the eyes of both of them are opened.

In the Book of Moses, we read that God shows the earth to a prophet. He sees Satan holding a great chain that veils the whole face of the earth with darkness, and Satan looks up and laughs as his demons rejoice. Angels descend out of heaven, and many of the people are caught up by its powers, but God looks on the rest of the people and weeps.

The prophet sees and asks, “Why do the heavens weep? How can you weep?”

“Look at these,” God answers, “I gave them their knowledge and agency. I told them to love each other and to choose me as their father, but they’ve no affection and hate their own blood. So Satan will be their father and misery their doom. The heavens and all my creations weep over them. Why shouldn’t they weep, seeing these will suffer?”

The prophet looks on the wickedness and the misery, and he also weeps, stretching out his arms. His heart swells wide as eternity, yearning, and all eternity shakes. He looks again on the earth, and this time hears a voice: “Wo, wo is me, the mother of men. I’m pained. I’m weary because of the wickedness of my children. When will I rest and be cleaned of the filth that’s gone out of me? When will my creator sanctify me, that I may rest?”

When the prophet hears the earth mourn, he weeps again, and cries to God: “Will you have compassion on the earth?”

The Mother of God

In the Gospels, we read of a women who’s expecting a child. While traveling, the time comes for the baby to be born, and she gives birth to a son. She wraps him in cloths and places him in a manger, because there’s no room for them.

In fields nearby, shepherds are watching their flocks when an angel appears to them. The glory of God shines around them, and they’re terrified, but the angel says, “Don’t be afraid. I bring good news of great joy for all people. Today a savior’s been born, and he’s the Messiah. You’ll find the baby wrapped in cloths and lying in a manger.”

Suddenly many more angels appear and proclaim, “Glory to God in the highest heaven, and on earth peace.”

When the angels are gone, the shepherds say to each other, “Let’s go and see what’s happened.”

So they hurry off and find the woman, and the baby, who’s lying in the manger. When they’ve seen him, they spread the news about this child, and all who hear it are amazed at what the shepherds say, but the woman treasures up all these things and ponders them in her heart.

With these stories freshly in mind, let’s think about the breadth and depth of motherhood. There’s a mother like Mary that labored to form and give birth to your body from her own. Who filled the role of Mary in your life? Mother Earth perpetually sustains our breath as she graciously offers her abundance in return for our love. How well are we loving her? From the dawn of history through generations, our ancestors and community, as Eve, have nurtured and cultivated us in wisdom. Who has filled the role of Eve for us, in the past and around us now? There’s also your Heavenly Mother, who inspires you to love and light beyond yourself. Can you imagine her now? Expressed in them all, motherhood encompasses them all, and maybe we honor motherhood best when we honor all that it can mean and the relations between its many expressions.

When we think of motherhood in this way, broadly and deeply, maybe we can understand why honoring our mothers may help us live longer and better – why the commandment is a promise to us all. A mother brought you to life, and whether you find yourself near or far from her, another beckons to us, and yet another is always near to warm us on our way. If we take her hand, she may walk with us into eternity, than which there’s no longer or better life.

I recently asked the persons who fill the roles of Mary and Eve in my life, my mother, my grandmothers, and my wife, to share with me their thoughts about their relation to their Heavenly Mother. I’d like to share some of their thoughts with you.

My mother, Mary Cannon Smith, was born and raised in a home with a devout Catholic mother and, at the time, a less-devout Mormon father. As she matured, she considered becoming a nun, but her father encouraged her to attend Brigham Young University before making that decision. As you’d guess, my mother ended up converting to Mormonism, and rather than becoming a nun, she married my father. Here’s what she told me about her relation to her Heavenly Mother: “I love the last couple lines in the third verse of the hymn, ‘Oh My Father,’ which read: ‘In the heavens are parents single? No. The thought makes reason stare. Truth is reason: truth eternal tells me I’ve a mother there.’ This confirms what both my intuition and practical nature have always felt: there are patterns and order, established in our premortal existence and related to creation, that common sense would tell us continue through the ages. Motherhood is an eternal principle.”

My maternal grandmother, Stephanie Plumb, was the devout Catholic that raised my mother. She was born and raised in Massachusetts, and moved to Washington state after marrying my grandfather. Later in life, like my mother, she converted to Mormonism. Here’s what she told me about her relation to her Heavenly Mother: “Even when I was a Catholic girl, I always knew I had a mother in heaven.” At this point her voice cracked as she continued, “It has been everything in my life. I know where my Heavenly Mother is. I know she’s watching over us.”

My paternal grandmother, Margery Cannon Wiscomb, was born and raised in Salt Lake City. She and my grandfather descend from Mormon pioneers. Here’s part of what she told me about her relation to her Heavenly Mother: “I do not pray to her, but I certainly honor, respect and cherish her as my Heavenly Mother. I believe she cherishes each one of her children and is interested in what we do; and like our Heavenly Father, she’s experienced mortal life, so she understands our situation.”

My wife, Dorothee Cannon, was born and raised in France. She and her family were also Catholic until her mother met some Mormon missionaries, which led to their conversions. Here’s what she told me about her relation to her Heavenly Mother: “I believe she’s the mother of my spirit, that she’s loving and nurturing, and that the love from a mother on earth can reflect the kind of love that our Heavenly Mother has for us.”

Motherhood has immeasurably enriched my own life. I love my strong mother, who has been and is my champion; my wise grandmothers, who have long shown me through their examples how to recognize and enjoy the best; and my beautiful wife, whose uncontainable kindness overflows into our children and all who know her. I’m grateful for the bountiful and fragile world that we all share; and particularly in this room, I’m grateful for our common trust that God is incomplete without our Heavenly Mother. With these thoughts and feelings, I wish you a happy Mother’s Day.