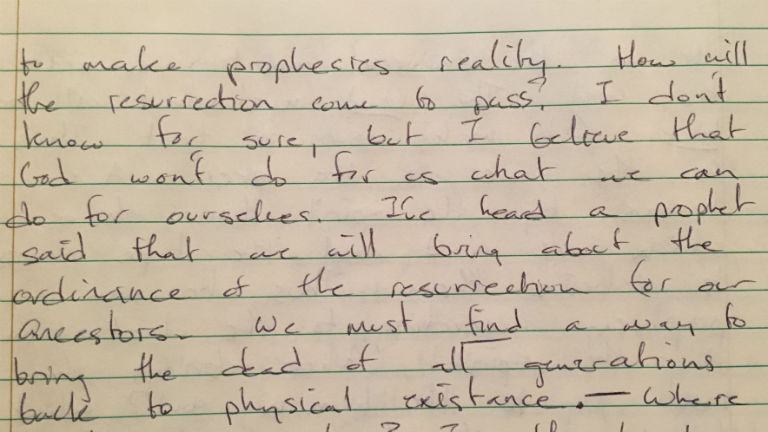 Today, while looking through old journal entries, I came across the following passage, written when I was a missionary for the LDS Church:

“He is God. He is a plurality of beings on the cutting edge of reality. He is the dictator of truth and the guardian of truth. He will make sure that all the prophecies will be fulfilled. This is faith. Waiting for the prophecies to happen isn’t faith, and if we want to learn to become Gods then we need to learn how to make prophecies reality. How will the resurrection come to pass? I don’t know for sure, but I believe that God won’t do for us what we can do for ourselves. I’ve heard a prophet said that we will bring about the ordinance of the resurrection for our ancestors. We must find a way to bring the dead of all generations back to physical existence.” (17 October 1995 in Aix-en-provence, France)

I would write some of that differently today. For example, I don’t particularly like the phrase “dictator of truth”. It sounds too autocratic, despite its attribution to a “plurality of beings”. Are they, together, a bunch of tyrants? As another example, today I wouldn’t write that God “will make sure that all the prophecies will be fulfilled”. As explained elsewhere, I don’t think some prophecies were intended to be or should be fulfilled.

However, fifteen years later, I continue to maintain this practical faith that we should consider it our responsibility to work out the prophesied resurrection. If we’re wrong, it either will or will not happen according to the powers, intelligent or otherwise, greater than us. If we’re right, we lose out on it unless and until we make it happen. God bless (we should hope) the pelagian heresy.