Ethical Progress Is Not Babel 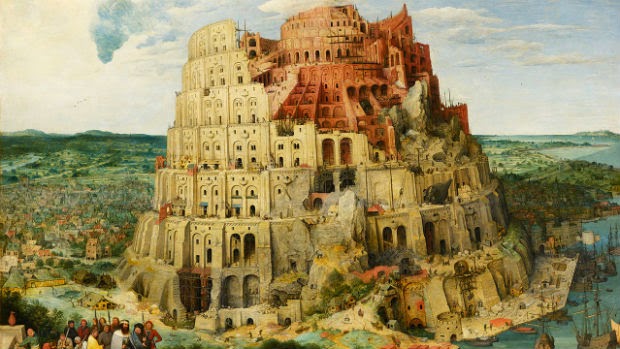 The Bible story of the tower of Babel is commonly considered a warning against hubris and is often used to condemn both the deification aspirations of Mormons and the posthuman aspirations of Transhumanists.

The word “Babel” only appears in the Bible twice, both in the book of Genesis, once just in passing and the other during the story of the tower. The builders want to build a tower “whose top may reach unto heaven” to unify and make a name for themselves (Genesis 11: 3-4). God observes that, because of their unity, “nothing will be restrained from them, which they have imaged to do”, so he changes their language and scatters them (Genesis 11: 6-7). No where does the Bible explain, beyond this terse reasoning, the moral of the story. Some are left wondering, as those who charge Mormonism and Transhumanism with hubris, whether God is opposed to human progress.

The Book of Mormon references the tower in four chapters, without much additional insight into the moral of the story. We read only that God instigated the scattering (Mosiah 28: 17) and that the scattering was just (Omni 1: 22) because the builders were inspired of Satan (Helaman 6: 28) and angered God (Ether 1: 33). Again, some are left wondering whether human progress is inspired of Satan.

In response to such wondering, Lorenzo Snow (fifth president of the Church of Jesus Christ of Latter-day Saints) taught the following:

“We should strive earnestly to establish the principles of heaven within us, rather than trouble ourselves in fostering anxieties like the foolish people of the Tower of Babel, to reach its location before we are properly and lawfully prepared to become its inhabitants. Its advantages and blessings, in a measure, can be obtained in this probationary state by learning to live in conformity with its laws and the practice of its principles. To do this, there must be a feeling and determination to do God’s will.” (Lorenzo Snow, Journal of Discourses 23: 189)

“The world have no idea of God, and they do not acknowledge him. He may develop, through one person, the principle of electricity, but the world will say it is some wise man that did it. He may, through another, develop the power of steam, but they say, Some wise man did it. Through another, God may make known the light-giving power of gas, to another the tapping of the earth to bring forth oils for illuminating purposes; but the world say, ‘Some wise man has done this.’ Men do not like to acknowledge God; it is just as the Scriptures say: they will not acknowledge him in all their thoughts. They want to get rid of him, and they give the glory to men for doing this, that and the other. Fools that they are! What do they know about these principles? Who organized the principles which they found out? Did man? Did he organize the principle of electricity or give it its vitality and power? Did any of our savants? No, they could not. Who placed the principle of power in steam? Did man? No, he could not do it. They want to throw off God where they can, while we want to bring him in and have him one of our crowd; that is the difference between us and them. They find out something which God has made, just as the little child when it discovers its fingers for the first time. It had them long before, but when they first attracted its attention it seemed to fancy it had made a great discovery. God organized the child and placed its spirit within its body, and it at last found out that it had a hand. And the scientific babies of the world just discover some of the properties matter, some of nature’s laws created by God long before, and like Nebuchadnezzar they cry, in the pride of their hearts, ‘Is not this great Babylon which I have built?’ Yes it is, and it is as much of a Babylon or Babel as the other was. Well, God has commenced to do a work, and he began, in the first place, with the very first principles of the Gospel, and he has led us on gradually, until we find ourselves in our present position, and we have got beautiful land here, haven’t we? … We are here to do a work; not a small one, but a large one. We are here to help the Lord to build up his kingdom, and if we have any knowledge of electricity, we thank God for it. If we have any knowledge of the power of steam, we will say its from God. If we possess any other scientific information about the earth whereon we stand, or of the elements with which we are surrounded, we will thank God for the information, and say he has inspired men from time to time to understand them, and we will go on and grasp more intelligence, light and information, until we comprehend as we are comprehended of God. This is what we are after. We are here to introduce correct principles upon the earth on which we live; but we cannot do it any more than any of these men can understand the laws of nature, unless God reveals them to us. The world is all confusion, and men need the illuminating influence of the Spirit of God.” (John Taylor, Journal of Discourses 15: 167)

“This day I have been walking through the most splended part of the City of n New Y- the buildings are truly great and wonderful to the astonishing [of] to eve[r]y beholder and the language of my heart is like this can the great God of all the Earth maker of all thing[s] magnificent and splendid be displeased with man for all these great inventions saught out by them my answer is no it can not be seeing these works are are calculated to mak[e] men comfortable wise and happy therefore not for the works can the Lord be displeased only aganst man is the anger of the Lord Kindled because they Give him not the Glory.” (Joseph Smith, Letter to Emma Smith on 13 October 1832 – spelling and punctuation from the original)

Today, as in the mythical days of Babel, we find ourselves at risk. Accelerating technological change has increased our destructive capacity faster than our defensive capacity. And yet, though our vices are many, our survival and progress so far are testimony to the extent of our virtues. We have proven ourselves at least benevolent enough to have attained an extent of heaven, however primitive, within the context of means provided by the grace of God. Have we reached our limits? Will we soon succumb to hubris? That depends in part on how we manage to proceed from here. Ethical progress is not Babel.