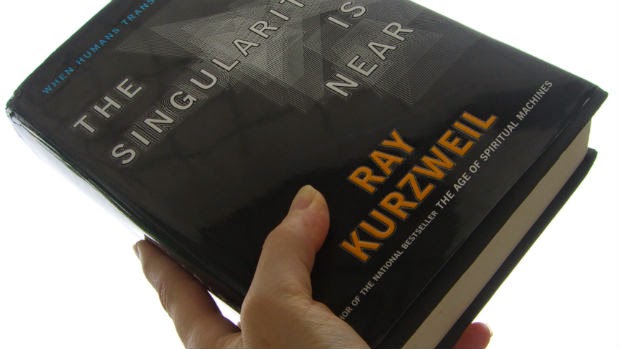 Matthew Bailey writes for H+ Magazine, provoking attention with the title “The Technological Singularity as Religious Ideology” and then quickly stating that “The Technological Singularity is NOT a Religion!” I agree with Matthew both that the technological singularity, in itself, is not a religion; and that it is compatible with religious views. In this post, I share some of my thoughts in response to Matthew’s article, with particular attention to where we might see things differently.

Matthew begins by defining his terms. First, he uses what he positions as one of Kurzweil’s definitions of the singularity: “the point at which intelligence becomes recursive”. I’ve never read or heard of this definition from Kurzweil, but there are some problems with it. First, intelligence is already and has long been recursively improving itself. Second, intelligence can recursively improve itself in many ways, not all of which would result in the exponential rate of change that leads singularitarians to anticipate something approximating a technological event horizon.

Second, he uses definitions of “religion” from the New Oxford American Dictionary. I won’t copy the definitions word for word here, but I’ll note that the definitions are refreshingly good! Most dictionaries I’ve looked at (maybe I haven’t looked at enough?) seem to define “religion” in terms either directly or indirectly related to the supernatural and the superstitious. In contrast, the New Oxford American Dictionary refers to the superhuman and systems of faith in pursuits or interests of supreme importance. Wow. I usually find myself defined out of religion by dictionaries, but these work for me.

Matthew observes that many persons express something of a blind faith in positive outcomes of the singularity. This is a valid observation. There are, indeed, many persons, both secular and religious, that have fatalistic perspectives on the future. However, there are also persons, like Kurzweil as Matthew points out, that advocate reasonable and practical faith: trust that we can and should try to work out positive outcomes by mitigating risks actively. While the reasonable and practical approach is certainly better than fatalistic passivity, it is no more nor less inherently religious. Matthew appears to associate religiosity mostly with the blind version of faith and not so much with the reasonable and practical version of faith, but that’s just his taste. I consider myself both religious and faithful, but I want nothing to do with and actively speak against blind faith. The faith I advocate and try to practice is trust that reflects both the degree of our ignorance and the degree of our ability to shape the future.

Next, Matthew mentions the value of creating story around singularitarian concepts, but then warns that we should take care to differentiate between story and reality. He doesn’t dig into this deeply, but it sounds like he is being somewhat self-deceptive, like many other persons that would differentiate between story and reality. We need to spend more time thinking about how our realities are stories, even when the realities are expressed in the most secular and reductionist of terms. It just turns out that some stories are better than others for some purposes. Mathematical stories are useful where epic stories are not, and vice versa. The idea of an absolutely non-subjective truth is just silly, as is the idea of mere relativism. True stories account for the full breadth of our shared experience, mathematically and epically. True stories are as likely to create experience as they are to discover experience. Until we realize this, we fail in our story-telling.

Near the end, Matthew implies concern that when we treat the singularity like a religious concept, we encourage others to take it less seriously. I have mixed feelings about this. On the one hand, if a person does not take religion seriously then, indeed, approaching the singularity from a religious angle would not be helpful. On the other hand, for those who feel the weight of religion, there is nothing more motivating. In the end, while I acknowledge the value of the secular view, I suspect the religious view will prevail because of the way it affects its adherents. Religion is a social power against which secularism can compete for hearts and minds only to the extent that religion unnecessarily positions itself against science and technology.

Finally, I need to write some things about Matthew’s comments about the Mormon Transhumanist Association (MTA), of which I am the president. He makes a good effort of characterizing the MTA accurately, but there are a few areas that can be improved.

Matthew references Mormon involvement in the Turing Church, which is basically a discussion group aimed at finding and building on commonalities between religiously-inclined transhumanist groups. I have participated in those discussions, have enjoyed becoming better acquainted with other participants, and can say unequivocally that I know of nothing particularly secretive going on. Interest in a closed group stemmed primarily from interest in contextual focus. Sometimes there’s value in discussing matters exclusively among like-minded persons and other times there’s value in engaging antagonists. Both have a place.

Matthew references “the Mormon sect of Transfigurism”, linking to the MTA web site. There are two technicalities I’ll point out here. First, the MTA is not a religious organization and is not affiliated with any religious organization, but it does support its members in their individual religious affiliations. Second, until now, I’ve not heard of anyone referencing Transfigurism as a “sect” of Mormonism. Certainly not all Mormons agree with the ideas advocated by the MTA, and it can be meaningful to categorize differences between Mormons, but “sect” suggests a formal religious distinction that few if any members of the MTA appear to identify with or advocate. Personally, I think of Transfigurism as an interpretation rather than a sect, and it happens to be an interpretation that is more interested in ecumenical strength than sectarian distinctions.

Matthew observes that the principal positions of the MTA, as articulated in the Mormon Transhumanist Affirmation, are not strange. Indeed, they’re not; however, he proceeds to list off a number of supposedly Mormon ideas that, particularly for persons unfamiliar with Mormonism, sound quite strange: degree of planet ownership and spiritual power based on proximity to Kolob, for example. Huh? I’ve been an ardent student of Mormon culture, philosophy and scripture for decades, and I’ve never seen Kolob described quite that way before. No harm done (or intended, I’m sure), but focusing in on a unique interpretation of Kolob should not be mistaken as the essence of Mormonism.