Becoming God Can Be Cruel and Irrational 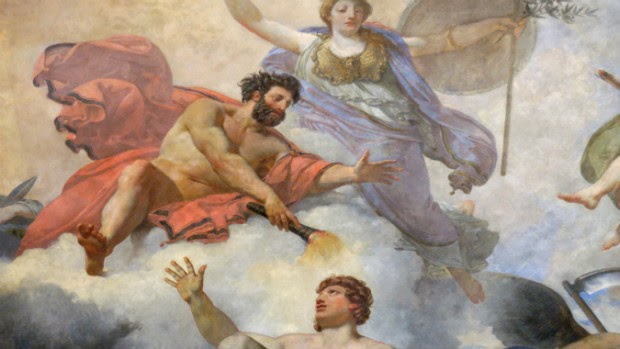 “God is cruel”, says Hank Pellissier, managing director of the Institute for Ethics and Emerging Technology. Here are my thoughts in response.

Hank, there’s considerable irony in your post: the charge that theism is illogical presents significant practical and logical challenges for a Transhumanist. You trust in humanity’s posthuman potential, and that we can shape that potential in positive ways, far surpassing humanity’s present capacities for empathy and creativity. That’s the essence of Transhumanism. However, evidence increasingly suggests that your hope is practically incompatible, if not logically incompatible, with atheism.

Despite strong similarities in our posthuman projections, you and I disagree about their ontological status. You say posthumanity doesn’t exist yet. I trust posthumanity already exists. You say I’m being illogical, and I charge you with the same. Let’s look at your reasons before returning to mine.

First, you appeal to the problem of evil: an all powerful loving God would not create a world with the evil we observe. We could discuss this issue for a long time, but I’ll only briefly comment here (more of my thoughts are available on “Gods of suffering and oppression”). On the one hand, I don’t think there’s any justification for the evil we observe. Real evil cannot be justified. That’s why it’s evil. On the other hand, perhaps the risk of evil can be justified. For example, to the extent you and I procreate or seek to develop artificial life, we’re complicit in any God’s crime of creating a world with risk of evil. Life is inseparable from risk of evil. Where there is no risk of evil, there is no life. Do you judge God differently than you judge yourself or would-be developers of artificial life? Perhaps, like you, God judged the opportunity of life to outweigh the attending risk of evil? In any case, the problem of evil is hardly so strong as some atheists would like to suppose, particularly when aiming it at the kind of theist that asserts limits, logical or practical, to God’s creative capacity.

Second, you appeal to a specific example of the problem of evil: God as described in the Bible. I share your negative assessment of many of the actions and ideas attributed to God in the Bible, most particularly in the Old Testament. I don’t share your conclusion that we should necessarily expect the Bible to be free of such negative attributions if God exists. While some theists hold that the Bible is inerrant, many don’t. I value the Bible as a record of humanity’s ancient, enduring and improving effort to understand God, which in practice is an effort to understand our posthuman projections, giving insight into our motivations and aspirations. I consider the Bible and other religious texts to be human works inspired of God, motivated by the esthetic of our posthuman projections, written and read fallibly. Like Joseph Smith, the founder of my religion, I think scripture can and should be improved. Like most Mormons, I think we should always expect more scripture. The inspiration of God has not ceased. The sublime esthetic of our posthuman projections persists and evolves.

Third, you appeal to another specific example of the problem of evil: Christianity as filicide. That’s a controversial interpretation for many reasons. I’ll just focus on my interpretation, which reflects my Mormon faith. If God killed Jesus, you and I are killing our children. That, however, is a sacrifice (yes, “sacrifice” is an accurate word) we’re willing to make, to give them the opportunity of life. If we feel justified in this sacrifice, might God feel justified in giving us life, even knowing we would suffer? Perhaps, like us, God is less concerned with avoiding suffering than with pursuing flourishing? After all, the best way to avoid suffering is to avoid life, but that’s also nihilism.

Fourth, you appeal to another specific example of the problem of evil: Jesus’ teachings about a loving God seem less honest than Old Testament teachings about a harsh God, because life itself can be harsh. I agree, of course, that life can be harsh. I also think you’d agree with me that we shouldn’t seek to be anything less than the most loving persons we can be; in other words, we shouldn’t emulate anything less than a sublimely benevolent posthuman projection, or worship anything less than a loving God. Trust in such a projection has merit whether that projection already exists or not. Hank, you do it, whether you call it “God” or not. Is it honest? How could it be dishonest, unless we also deny the evils we observe? Relatively few theists today or historically have denied the existence of evil. Honesty isn’t the issue. The issue is whether there’s reason to suppose posthumanity already exists, while we simultaneously experience evil, and indeed there are reasons.

So let’s turn to my reasons for trusting that posthumanity already exists, not only as projections in which you and I both engage, but also as approximate realizations of those projections. Before I summarize those reasons, it’s worth pointing out that I was once much more like you, Hank. I was once highly skeptical of the present existence of God, but I valued humanity’s progress toward capacities that many of us would describe as Godlike. I saw an immanent God, emerging with humanity, but I was skeptical toward a transcendent God. That changed.

The strength of this argument persuaded me to change from skeptical to faithful. It also continues to motivate me to second guess my reasoning from observations of evil. Our probable future correlates with God’s probable present. I want our future to be sublimely compassionate and creative. Is that a reasonable expectation? It’s not if God doesn’t exist, because we almost certainly will not be the first or only to become God. If God does exist, we can have reasonable hope of becoming Gods ourselves, but what does that imply about the world we observe? Why would God allow evil? To the extent God can’t stop it, why not? To the extent God can stop it, why now? Denying the existence of God is the easy answer, and indeed the answer warranted by logic and observation, unless we take into account our practical and moral interests. Despite your claims, Hank, faith in God within a context of evil doesn’t merely reassure us of rewards in immaterial escapist heavens, make us feel closer to imaginary friends, or exhibit a will to ignorance. To the contrary, faith in God is trust in flourishing in compassion and creation beyond our present capacities. Faith in God is working trust in our desired future.

Transhumanism is not a new option, except in name. In essence, it’s as ancient as religion. God, no matter the details, is and has been throughout history a posthuman projection. Not all Gods are equal. Like us, some are cruel, escapist or nihilistic. Also like us, some are compassionate and creative. I advocate faith in Christ, exemplified by Jesus, not understood as a mere implicit posthuman projection, but rather understood explicitly as compassionate and creative posthumanity. Prehumanity evolved within the contours of our environment, humanity now projects itself to fill our environment as “God”, and posthumanity will realize those projections, creating worlds without end within which our creatures may in turn evolve into Gods, not merely as our prosthetics, but rather as genuinely compassionate creators in themselves, progressively relinquished from our power, as children growing to maturity.

When radical life extension arrives, what will religion look like in retrospect? It will look like prophecy fulfilled, and evidence that the plan of God is progressing. When resurrection arrives, what will God look like in retrospect? For atheist Transhumanists, God will look like irony: the practical realization of their posthuman projections, despite the utter improbability that they’re the first or only to realize those projections. For some of us, becoming God will demonstrate our irrationality.