Glimpse a Future of Religion through Transfigurism 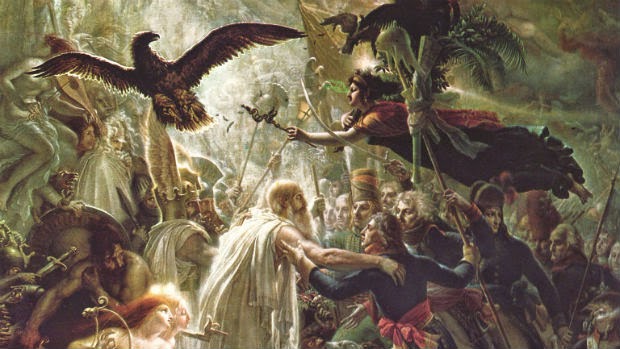 What is the future of religion? Some expect the resurgence and ultimate triumph of this or that fundamentalism. Some expect the religious phenomenon itself to weaken and die, a casualty to the science of our day. Others, observing the history of religion, expect that it will continue to evolve, inextricably connected to and yet clearly distinct from its past. If such an evolution occurs, what will religions of the future be like?

For that matter, what will humans of the future be like? It would seem relatively unprofitable to speculate about religions of the future without taking into consideration their adherents. Like with religion, some idealize a particular human form and function and expect it to persist indefinitely, while some expect eventual human extinction through natural or artificial disaster. Others project our evolutionary history into the future, and recognize that, as there was a time when our ancestors were prehuman, there may be a time when our descendants will be posthuman, as different from us in form and function as we are now different from our prehuman ancestors.

Transhumanists advocate the ethical use of technology to direct our own evolution. As Humanists in the broadest sense, Transhumanists generally emphasize the value of humanity; however, Transhumanists also recognize an essential dynamism in humanity and value that which we may become at least as much as that which we are. Many Transhumanists envision a future of abundant energy, molecular manufacturing, indefinite lifespans, enhanced intelligence, and overall radical flourishing. Although most are non-religious, a significant and growing minority of Transhumanists are religious.

Transfigurists are religious Transhumanists. The term “transfigurism” denotes advocacy for change in form. It also alludes to sacred stories from many religious traditions that revere change in form, such as the Universal Form of Krishna in Hinduism, the Radiant Face of Moses in Judaism, the Wakening of Gautama Buddha in Buddhism, the Transfiguration of Jesus Christ and the Rapture in Christianity, and the Translation of the Three Nephites and the Day of Transfiguration in Mormonism.

Unlike some religious persons, Transfigurists generally share with non-religious Transhumanists the hope that we can make our dreams come true in this world, and trust that science and technology are among the means for doing so. However, in contrast to non-religious Transhumanists, Transfigurists generally regard religion as a powerful social technology that, like all other technologies, we should use ethically, mitigating risks and pursuing opportunities, to set our environment and direct our evolution.

Perhaps a profitable way to start imagining the future of religion, religions of the future, and how they will evolve along with us, is to consider the views of Transfigurists. What does religion look like through their eyes, given lenses colored by expectations of directed evolution? Maybe that vision more closely approximates probable futures for mainstream religions than do those that ignore or reject evolution? Maybe the Transfigurist vision approximates probable futures for mainstream religions even more closely than do those that embrace evolution but have not explored the related ramifications of technology? Assuming we and our religions will continue to evolve together with increasing intentionality made possible by technology, it seems reasonable to suppose that Transfigurism, more than any other contemporary religious view, is positioned to glimpse into a future of religion.