Key to the Science of Theology 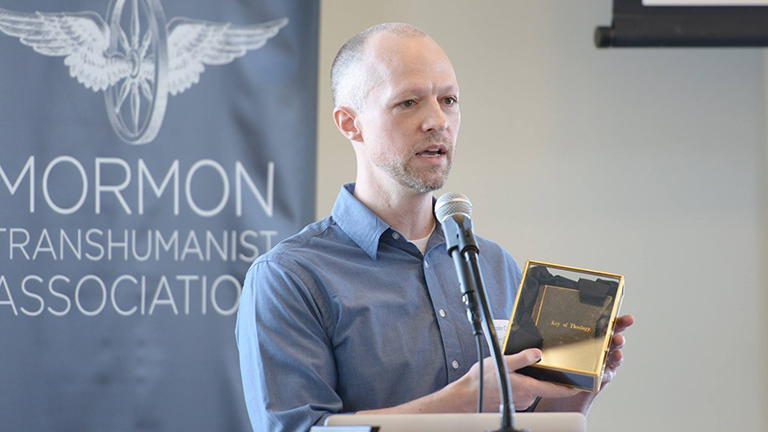 This is a transcript of my talk at the 2016 Conference of the Mormon Transhumanist Association, held yesterday in the Provo Library. The conference attracted about 65 attendees in person, and hundreds of others watched the livestream from Transfigurism.org. Keynote speakers were Rosalynde Welch and Eric Steinhart, and many family members and friends were in attendance.

Three years ago at this conference, the renowned historian of Mormon origins, Richard Bushman, proposed that the mission of the Mormon Transhumanist Association is to take the place of B H Roberts and John Widtsoe. Roberts and Widtsoe, now long deceased, were Mormon apostles and champions of science.

In 1908, Widtsoe published a book entitled, “Joseph Smith as Scientist”. In it, Widtsoe claimed that, “Truth is truth forever. Scientific truth cannot be theological lie.”

Of similar mind, Roberts wrote in 1931 that, “To pay attention to and give reasonable credence to [science] is to link the church of God with the highest increase of human thought and effort.”

Roberts and Widtsoe weren’t the first Mormon apostles to champion science. One of their predecessors was Parley Pratt, who was among the original twelve Mormon apostles organized by Joseph Smith. In 1855, Pratt published a book entitled, The Key to the Science of Theology. It begins with these words, which would resonate with just about any Transhumanist:

“The present is an age of progress, of change, of rapid advance, and of wonderful revolutions.

“The very foundations of society — social, political, commercial, moral and religious, seem to be shaken as with a mighty earthquake, from centre to circumference. All things tremble; creation groans; the world is in travail, and pains to be delivered.

“A new era has dawned upon our planet, and is advancing with accelerated force — with giant strides.

“The rail-roads and the steam-boats, with their progressive improvements in speed, safety and convenience, are extending and multiplying the means of travel, of trade, of association, and intercommunication between countries whose inhabitants have been comparatively unknown to, or estranged from, each other.

“But, as if even these means were too slow for the God-like aspirations, the mighty throes of human thought, and its struggles for light and expansion, [humanity] seizes the lightning, tames and subdues it, and makes it the bearer of [its] thoughts and despatches. While these things are in progress by one portion of [humanity], another learns to seize and control a sunbeam, in a manner subservient to the progress of the fine arts: and by which means [one] performs in a minute, the work which a short time since would have employed the most active years of a lifetime.”

Another Mormon apostle that championed science was James Talmage. He was a contemporary of Roberts and Widtsoe. And echoing Pratt in 1899, Talmage wrote:

“To count the ticking of a watch thousands of miles away; to speak in but an ordinary tone and be heard across the continent; to signal from one hemisphere and be understood on the other though oceans roll and roar between; to bring the lightning into our homes and make it serve as fire and torch; to navigate the air and to travel beneath the ocean surface; to make chemical and atomic energies obey our will — are not these miracles?”

At some point in his life, Talmage had acquired a copy of Pratt’s book, The Key to the Science of Theology. I know that because I have it here. I received this book from my step grandfather, Wayne Wiscomb, who had received it from his first wife, Helen Brandley Wiscomb, a granddaughter of Talmage.

For me, this book embodies Mormon Transhumanism. Both advocate the ethical use of technology and religion to extend human abilities. Both envision a future of unlimited human potential in compassion and creation. Both are an inheritance from past champions of science, inspired by their Christian discipleship. And today, both move on to their next caretaker.

A few months ago, I told the board of directors that I felt it was time for the association to have a new president. While I admit to some sadness, I believe ten years is long enough for anyone to lead our association. As Transhumanists, we know better than most that change is essential to progress. And as religious Transhumanists, we also know better than most that change is too often most resisted when and where it’s most needed. 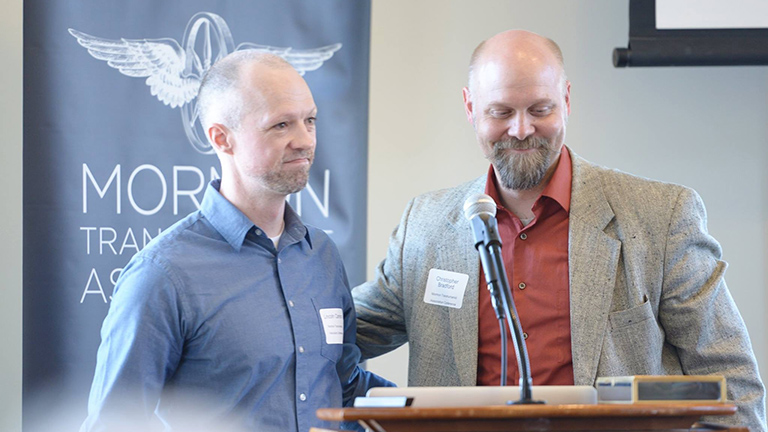 Photo by Blaire OstlerSo last month, the other board members and I – all of us democratically elected to represent voting members of the association – we met together to select a new president. And the outcome was a unanimous vote for Christopher Bradford.

I’m proud to call Chris my friend. Over 15 years ago, we met in online religious discussions at Beliefnet. And we’ve since spent countless hours together discussing just about every topic I’m capable of imagining. Chris was one of the fourteen founders of our association. And he has also served as a director and vice president. Chris knows Mormonism and Transhumanism and this association as well as anyone, and better than most. And he has my full support and confidence as our new president.

Chris, I give you The Key to the Science of Theology. I trust it will inspire you as it has inspired me.