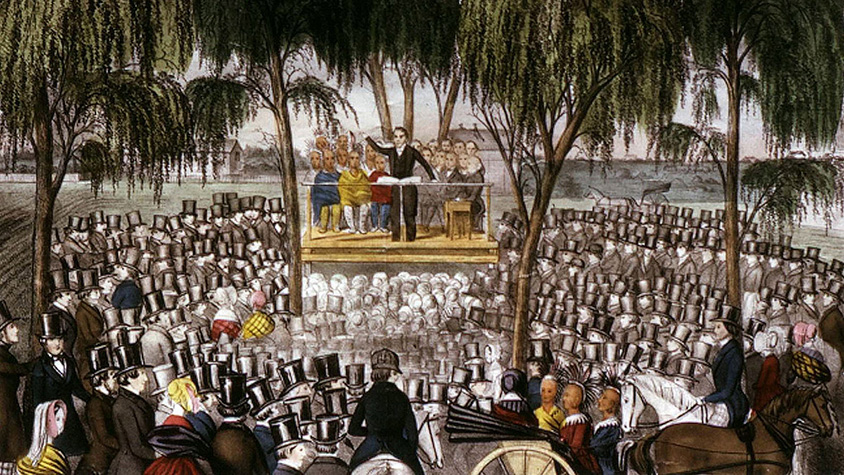 The Church of Jesus Christ of Latter-day Saints (LDS Church), the largest Mormon denomination, has had 16 presidents since and including Joseph Smith, the founding prophet of Mormonism.

Below is a list of the last general conference sermons delivered by LDS Church presidents. I’ve also included links to transcripts and recordings, as well as excerpts that I particularly liked, or that I found particularly interesting or illustrative of the sermon.

The list doesn’t include President Thomas Monson. He is alive and currently serving as president of the Church, although it’s unclear whether his health will permit him to speak at the next general conference, which is coming up soon. So the list only includes fifteen presidents because we can’t yet identify President Monson’s last general conference sermon.

“Here, then, is eternal life: to know the only wise and true God. And you have got to learn how to be gods yourselves, and to be kings and priests to God, the same as all gods have done before you, namely, by going from one small degree to another, and from a small capacity to a great one; from grace to grace, from exaltation to exaltation, until you attain to the resurrection of the dead, and are able to dwell in everlasting burnings, and to sit in glory, as do those who sit enthroned in everlasting power.”

“Supposing that the property of the whole community were divided today equally amongst all, what might we expect? Why, a year from today, we should need another division, for some would waste and squander it away, while others would add to their portion. The skill of building up and establishing the Zion of our God on the Earth is to take the people and teach them how to take care of themselves and that which the Lord has entrusted to their care, and to use all that we command to glorify his holy name. This is the work of regenerating, of elevating mankind to the higher plane of the Gospel.”

Topic: Persecution of Polygamists by US Government (transcript)

“The lowest class of men, who violate their marital relations, and trample under foot all principles of virtue and integrity, can go on our juries, can vote at the polls, through the intrigues of corrupt men. And they thus try to shackle a free people, bring them into bondage, and make slaves of them, unless they will bow to their infernal behests. And in the name of Israel’s God, we will not do it. We are not going to elevate prostitutes and men who violate their marital relations above men and women who are virtuous, honorable and upright. These are my feelings, and I am not afraid to proclaim them to the world.”

Topic: Temple Work for Founders of US Government (transcript)

“Every one of those men that signed the Declaration of Independence, with General Washington, called upon me, as an Apostle of the Lord Jesus Christ, in the Temple at St. George, two consecutive nights, and demanded at my hands that I should go forth and attend to the ordinances of the House of God for them. … Would those spirits have called upon me, as an Elder in Israel, to perform that work if they had not been noble spirits before God? They would not. I bear this testimony, because it is true. The Spirit of God bore record to myself and the brethren while we were laboring in that way.”

“[Stake presidents] should consider the people in their respective Stakes, in their various dominions. They should regard them as their own family, as their sons and daughters; and take as deep an interest in them as they ought to take in their own wives and children. It should be their thought by day and by night, how and in what way they can be most serviceable to their respective charges. Oh, brethren, do remember these things that I am now talking about. Do not forget them.”

Context: World War I would end in 1 month (8 days before death)

“When you know God’s truth, when you enter into God’s rest, you will not be hunting after revelations from Tom, Dick and Harry all over the world. You will not be following the will of the wisps of the vagaries of men and women who advance nonsense and their own ideas. When you know the truth you will abide in the truth, and the truth will make you free, and it is only the truth that will free you from the errors of men, and from the falsehood and misrepresentations of the evil one who lays in wait to deceive and to mislead the people of God from the paths of righteousness and truth.”

“Into many of our homes sorrow has come since last conference. In the days ahead we must face the fact that more homes and more families will be broken by news of death and of other tragedies. May the peace and comfort of our Father in heaven bring its healing influence to all who are called upon to mourn and to bear affliction. And may we be strengthened with the understanding that being blessed does not mean that we shall always be spared all the disappointments and difficulties of life. We all have them, even though our troubles differ.”

“What I want to emphasize is this: Not only do we have all that is contained in these sacred records, but also when you have received the gospel, been baptized, had the hands of the servants of the Lord laid upon your head and received the Holy Ghost, you have a right to the inspiration of the Almighty, if you live to be worthy of it.”

Context: Read by his son (he had not spoken directly in general conference since October 1966)

Topic: Value of the Church (transcript)

“Think what the Church is doing to help this army of leaders and teachers as individuals to become strong in the battle against the forces of the world! First, it places upon them the obligation of teaching their fellowmen by example, and there is no better safeguard placed upon an honest man or a sincere woman. Second, it develops the divine attribute of love for others. … The third requirement is purity of life. … Finally, it gives these leaders and teachers an opportunity to serve their fellowmen and thereby magnify the calling that has come to them and, indeed, to prove that they are real disciples of Christ.”

“I think we should conclude on a tone of thanksgiving, of blessing, and of testimony. I have no language to convey the feelings of thanksgiving which are in my heart for the infinite and eternal blessings the Lord has given to me, to my family, to the Church, and, in fact, to the whole world.”

Topic: End of the World (transcript)

“[Matt 24] … Brothers and sisters, this is the day the Lord is speaking of. You see the signs are here. Be ye therefore ready. … Let us not turn a deaf ear now, but listen to these as the words that have come from the Lord, inspired of him, and we will be safe on Zion’s hill, until all that the Lord has for his children shall have been accomplished. … And so, in the closing moments of this conference, I have been moved as I think I have never been moved before in all my life.”

Context: Read by his secretary (he had not spoken directly in conference since April 1981)

“There are some in the world who mistakenly say that we are a non-Christian Church, a cult, that we worship Joseph Smith rather than our Savior, Jesus Christ. How far from the truth they are! What heresy! … For the past century and a half since the Restoration, beginning with the Prophet Joseph Smith, the latter-day prophets of God have raised their voices in clarity and with authority and truth as they have borne their testimonies of the divinity of this great latter-day work and the redemptive power of the gospel of Jesus Christ.”

Context: Read by his counselor (he had not spoken directly in conference since April 1989)

Topic: To the Elderly (transcript and recording)

“May we suggest eight areas in which we can make the most of our senior years: 1. Work in the temple and attend often. … 2. Collect and write family histories. … 3. Become involved in missionary service. … 4. Provide leadership by building family togetherness. … 5. Accept and fulfill Church callings. … 6. Plan for your financial future. … 7. Render Christlike service. … 8. Stay physically fit, healthy, and active.”

“Let us follow the Son of God in all ways and all walks of life. Let us make him our exemplar and our guide. We are at a time in the history of the world and the growth of the Church when we must think more of holy things and act more like the Savior would expect his disciples to act. We should at every opportunity ask ourselves, ‘What would Jesus do?’ and then act more courageously upon the answer. We must be about his work as he was about his Father’s. We should make every effort to become like Christ, the one perfect and sinless example this world has ever seen.”

“To you, this day, I affirm my witness of the calling of the Prophet Joseph, of his works, of the sealing of his testimony with his blood as a martyr to the eternal truth. Each of you can bear witness of the same thing. You and I are faced with the stark question of accepting the truth of the First Vision and that which followed it. On the question of its reality lies the very validity of this Church. If it is the truth, and I testify that it is, then the work in which we are engaged is the most important work on the earth.”

On a personal note, I’m inspired by much in these sermons. And I value the insights they provide into the evolution of my religion and culture, which I love. But I can’t say I agree with everything in them.

With other members of the LDS Church, I sustain these persons as apostles and prophets, not because I think them infallible and not because I feel any obligation to unquestioning obedience. To the contrary, I consider them all quite fallible, every bit as human as you and I. And I consider the notion of unquestioning obedience to be a stupendously bad idea in general.

To sustain a person as an apostle and prophet means, to me, to support that person in the effort to be a messenger, which is the meaning of “apostle” in Greek. And it’s to support that person as a forth-teller, which is the function of a prophet in the Hebrew tradition, in contrast to fortune-telling. And I feel that I and others provide this support best when we seriously listen to their words, thinking about and feeling them, whether or not we end up agreeing with them.