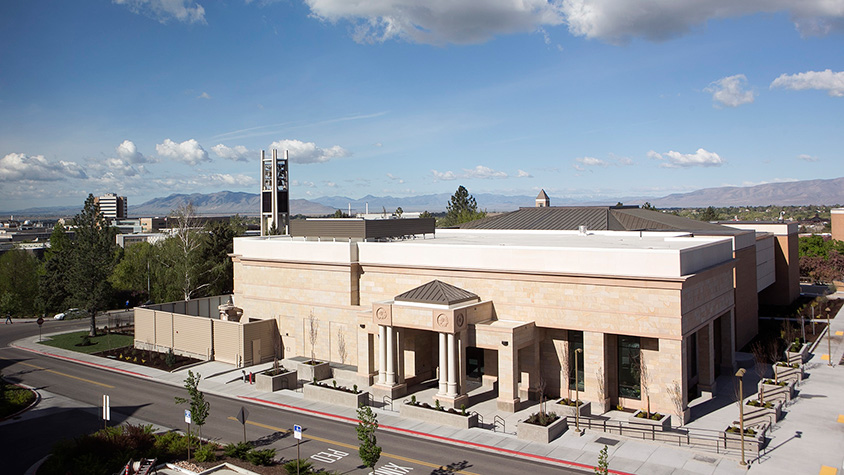 If, like I am, you’re a Mormon that considers our religion and evolution to be complementary, you have an opportunity. Organizers at the Monte L. Bean Life Science Museum at Brigham Young University are considering an exhibit on the theme of “Faith and Science.” And they are collecting feedback on exhibit ideas via a survey that you can take before 1 September 2017.

I took the survey. I like their ideas, and I think it’s a project worth supporting. So please go take the survey. I also thought it would be valuable to share with you some of my thoughts that I submitted along with the survey, perhaps further to motivate you to go share your thoughts with them too. If you don’t want my thoughts to influence your response to the survey, go take it before reading further.

The organizers have three main ideas for the exhibit:

In the survey, they elaborate on each idea, as quoted below. After each quote, I include the thoughts that I shared with them in response to the survey.

How do we gain knowledge of truth? Revelation and scientific discovery represent complementary approaches to learning truth. Although there are significant differences between them, there are also many similarities in the processes they follow. For example, the process of revelation starts with faith in God, but also requires study, action (i.e. ‘experimenting upon the word’), and prayer. Similarly, science often begins with a hypothesis, and then conducts experimentation to test it. Whether truth comes from a scientific laboratory or by revelation from the Lord, it is all compatible because God is the ultimate source of all truth.

I think it may be worth exploring the possibility that God also works to discover truth – not just to create or originate truth. Joseph taught that God “found himself” in the midst of spirits and matter and began to institute laws whereby others might also progress (see the King Follett sermon, which was his last general conference sermon). This implies that God is both a discoverer and creator of truth, setting the example for us to do both too.

What is the evidence for evolution? Biological evolution is defined as ‘change in the heritable characteristics of biological populations over successive generations’ (Wikipedia). Evolution is one of the most important ideas of biology and science generally. It is the best scientific explanation we have for patterns found in nature such as DNA similarity among the variety of earth’s lifeforms, the fossil record, extinction, anatomical similarities between species during embryonic development, variation among domesticated plants and animals, and more. All this evidence taken together suggests that all lifeforms are related through a pattern of ancestry and descent.

In science, it is not possible to prove with absolute certainty that a given explanation is complete and final. Some of the explanations advanced by scientists turn out to be incorrect when they are tested further by observations or experiments … However, many scientific explanations have been so thoroughly tested that they are very unlikely to change in substantial ways as new observations are made’ (Ayala, F. J., Science, Evolution, and Creationism, 2008. National Academy of Sciences). The process of biological evolution by natural selection is one example of a scientific explanation that has been overwhelmingly substantiated.

I think it would be nice to help visitors understand that “theory” is the strongest result of the scientific method. We should not think evolution is tentative or controversial because scientists call it a “theory.” To the contrary, it is among the most well-evidenced theories that the scientific method has ever produced. I also think it’s highly important to help fellow members of the Church understand that human evolution, in particular, is well-evidenced. And there are many ways to understand human evolution that are fully compatible with the Gospel of Christ. Too many of us have had our faith harmed because we’ve received insufficient help understanding the compatibility of the Gospel and human evolution.

How can we make sense of evolution in light of the restored gospel? The LDS Church has no official position on the theory of evolution. ‘Organic evolution, or changes to species’ inherited traits over time, is a matter for scientific study. Nothing has been revealed concerning evolution. Though the details of what happened on earth before Adam and Eve, including how their bodies were created, have not been revealed, our teachings regarding man’s origin are clear and come from revelation.’ (New Era, October 2016).

Evolution and creation need not be seen as mutually exclusive ideas. Through the restored gospel, we understand that God created and prepared the earth for a specific purpose: to provide the conditions where His children could receive a physical body, learn and grow through mortal experiences, and ultimately progress to become like Him. Pairing this knowledge with what we know through science about the history of life on earth can help us more fully appreciate and reverence our God for the incredible care and the love that went into the preparation of the Earth for mankind.

I think it would be valuable to provide multiple explicit examples of how LDS biologists understand the compatibility of the Gospel and human evolution. Practically, it’s too often insufficient when someone encounters a faith crisis to allude simply to the possibility of compatibility in the abstract. It’s right, of course, to point out that there’s no one right interpretation of the compatibility. But examples are still helpful for those beginning the journey of understanding.

Next, the survey asks to stack rank the ideas in order of interest and to provide an explanation for the stack rank. My first choice was “Creation and Evolution.” My second was “Understanding Evolution”. And my third was “Discovering Truth”.

There is widespread need for better understanding of the compatibility of the Gospel and human evolution. This is causing unnecessary disillusionment among many members of the Church, in part because they feel like the science is true but haven’t recognized how it can be compatible with the Gospel. Also in part, the problem is arising from some members that insist, wrongly, that the two cannot be compatible, and thereby frustrate and sometimes drive away members who are persuaded by the science. Secondarily, it’s important to understand evolution accurately if we’re going to come up with durably persuasive explanations of its compatibility with the Gospel.

Position on Evolution and Faith

Finally, the survey asks to choose a position that best represents you among four options:

Although I chose #4, none of these positions represents me well. Evolution and the Gospel are not entirely separate and distinct bodies of knowledge. They have significant overlap in questions and domains. And in my experience, rather than resulting in conflicts, a better understanding of each has resulted in a better understanding of the other. In my worldview, they’re not merely compatible. They are complementary. Mormons should be the foremost evolutionists in the world.

So if you haven’t yet taken the survey, go do it! Remember that it closes on 1 September 2017.