As One that Hath a Familiar Spirit 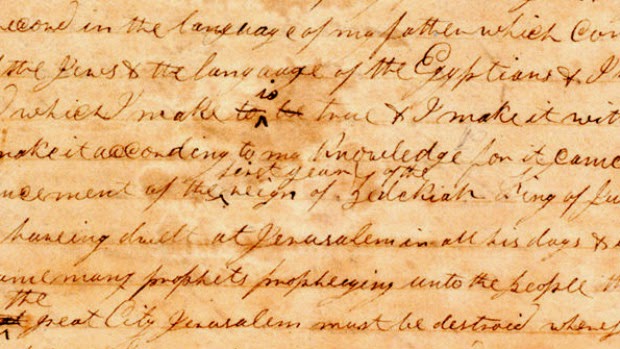 If you are familiar with the Book of Mormon and the King James translation of the Bible then you know they contain many textual similarities. Nephi extensively quotes Isaiah. Jesus repeats to the Nephites many of his words recorded in the Gospels. Moroni teaches of charity with words nearly identical to those used by Paul in his first epistle to the Corinthians. These examples are three of the more familiar similarities, and are hardly exhaustive.

The similarities provide interpretive insights for Mormons engaged in devotional study of their scriptures. Subtle changes in Isaiah’s words as quoted by Nephi may increase clarity or breadth of applicability. Jesus’ repetition may emphasize the relative importance of some teachings. Moroni may tie the same ideas expressed by Paul to additional ideas that Paul did not address.

The similarities also pose interesting questions for Mormons committed to Book of Mormon historicity. How could Nephi have quoted parts of Isaiah written after Nephi left Jerusalem for the Americas?[1] Why would a translation of Jesus’ words from Greek so closely resemble a translation of his words from reformed Egyptian?[2] How could Moroni have repeated words nearly identical to those used by Paul when the two lived half a world apart? Joseph F Smith, sixth president of The Church of Jesus Christ of Latter-day Saints,[3] commented:

“I do not know that I can say that the Church as yet has settled upon any explanation which could be regarded as an authoritative view on the subject. Each one has been left to settle the matter upon the lines which seem most reasonable to him. We have no word from the Prophet Joseph Smith, or those who were immediately associated with him in bringing forth the Nephite record, to aid us in a solution of the matter. We are left, therefore, very largely to conjecture.”[4]

Mormon apologists have proposed various explanations. Parts of the book of Isaiah may be older than most scholars recognize.[5] God may have syntactically revealed Jesus’ words to Joseph Smith as he translated reformed Egyptian.[6] Both Paul and Moroni may have quoted a document written before Nephi’s departure from Jerusalem.[7] Perhaps Joseph Smith used the Bible while translating the Book of Mormon.[8] Joseph F Smith trusted that this subject “would in time be satisfactorily settled”.[9]

If ever that time comes, when both apologists and skeptics acknowledge a satisfactory settlement, it will be the result of a holistic explanation. Such an explanation must account for the full extent and complexity of textual similarity between the Book of Mormon and the Bible, and that is possible only in context of a thorough presentation of their similarity. To that end, I have worked to present in detail a textual comparison of the Book of Mormon to the King James translation of the Bible.

In May 1998, I published the first edition of my work, As One That Hath a Familiar Spirit: A Parallel Textual Comparison of the Book of Mormon to the Authorized King James Version of the Holy Bible.[10] A few months earlier, in December 1997, I began a manual computer-assisted process of comparing the texts. Using Infobases’ LDS Collectors Library[11] on a laptop computer,[12] I opened the Book of Mormon in one window and a search dialog scoped to the Bible in another window, side by side. I typed or copied text from the Book of Mormon to the search dialog, ran the search, reviewed results, and noted all that seemed sufficiently similar – an admittedly subjective process. Verse by verse, phrase by phrase, and often word by word, I repeated the process until, in February 1998, I completed the comparison. After several weeks editing, eliminating weak similarities, highlighting common words, compiling an index, and incorporating feedback from family and friends, the final product was 112 pages[13] of similarities.

I’m now prepared to publish a second edition, which is entirely computer-generated. The algorithm is basically the same process I learned and used while producing the first edition, except that it relies on objective calculation of improbable similarities[14] instead of subjective assessment of significant similarities. During spare time in 2005 and 2006, I automated the algorithm in a software application,[15] which of course dramatically improved the speed and accuracy of the process when compared to performing it manually. However, my attention refocused,[16] and I did not publish anything at that time. In 2012, I decided to make a few improvements to the software application and publish a second edition textual comparison of the Book of Mormon to the Bible.

I’ve published each section of the second edition here on my blog:

Pending sufficient interest, I may also work toward publishing more formal print or ebook copies of the entire work. If you would be interested in purchasing a print or ebook copy, please let me know by clicking here. Thanks for your support.