Chapter Three of The God Delusion by Richard Dawkins 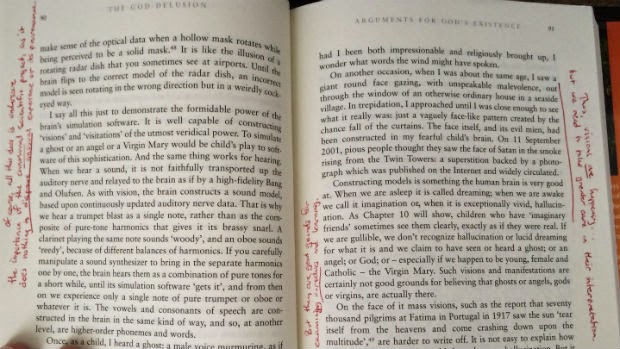 This is my third post about Richard Dawkins’ book, The God Delusion. The first two posts are available at the following links:

For emphasis, I will repeat some things mentioned at the beginning of my first post. I respect Dawkins as an excellent and inspiring evolutionary biologist. Although he misrepresents and misunderstands religion as a whole, he justifiably expresses anger and distrust regarding many particular aspects of religion. His view of religion is more black and white than mine; and, although sympathetic, I disagree with him. God is not always a delusion.

In chapter three, “Arguments for God’s Existence,” Dawkins examines reasons that various persons forward in defense of their belief in God. Overall, I am sympathetic with Dawkins’ criticisms in this chapter. Irrationality, anti-intellectualism, uncritical appeals to authority, and apathy toward objectivity, all too often accompany religious faith. However, Dawkins fails to address or weakly addresses what are, in my estimation, good reasons for faith in God.

Dawkins begins by discussing some well-known logical arguments from Thomas Aquinas and Saint Anselm for the existence of God. He rightly points out that most of Aquinas’ arguments (unmoved mover, uncaused cause, the cosmological argument and the argument from degree - saving the argument from design for later in the book) depend on the unnecessary assumption that there can be no infinite regress. Moreover, there seems to be no reason to suppose that whatever might terminate an infinite regress would necessarily have any of the characteristics frequently attributed to God, such as great knowledge or benevolence. Dawkins also rightly points out that Anselm’s ontological argument (which is, to paraphrase, that which is most perfect must exist) depends on the unnecessary assumption that existence is more perfect than non-existence. Ironically perhaps, the failure of these arguments is essential to Mormon theology, which suggests infinite regressions of causation and eternal progress in or toward perfection, as illustrated in the well known hymn, “If You Could Hie to Kolob:”

If you could hie to Kolob in the twinkling of an eye,
And then continue onward with that same speed to fly,
Do you think that you could ever, through all eternity,
Find out the generation where Gods began to be?

Or see the grand beginning, where space did not extend?
Or view the last creation, where Gods and matter end?
Methinks the Spirit whispers, “No man has found ‘pure space,’
Nor seen the outside curtains, where nothing has a place.”

Next, Dawkins takes up the argument from beauty. This argument suggests that the great achievements of human artists are evidence for the existence of God; we would not be capable of such greatness without inspiration from God. Dawkins explains that it is not self-evident that humans are incapable in themselves of such greatness. I agree with him, to the extent that we’re talking about divinity entirely external to humans. However, I do think great human achievements are worthy of admiration as rising divinity within humanity. As LDS Church President Spencer W Kimball put it, “we are gods in embryo.”

Dawkins continues on to discuss the argument from personal experience. Subsequent to describing an array of divine experience claims, he summarizes his criticism as follows:

If you’ve had such an experience, you may well find yourself believing firmly that it was real. But don’t expect the rest of us to take your word for it, especially if we have the slightest familiarity with the brain and its powerful workings.

Here, I have both an agreement and a disagreement to express. On the side of agreement, there are far too many persons who are apathetic toward the hard work of improving our communally shared knowledge (what we call “objectivity”) through means such as the scientific method. This demonstrates a lack of charity toward others, so far as I am concerned, in that it places one’s own experience above all others’ experience. We have a duty, a moral obligation, to pursue shared knowledge.

On the side of disagreement, Dawkins’ criticism of the argument from personal experience does not apply whatsoever to divinity in us. Moreover, it does not exclude divinity external to us. Our brains are not closed systems - unless we are solipsists - and if an electrical current to a brain can induce a spiritual experience then an external god could use that mechanism to produce a spiritual experience. Of course, this doesn’t prove the existence of external gods - it doesn’t even prove the existence of external persons, for the solipsists. However, it does leave our minds open to real possibilities, which can be investigated both individually and communally, via both spiritual practice and the scientific method.

Next, Dawkins addresses the argument from scripture. Identifying both ethical and historical problems in the generation and content of the Bible, he concludes that it is fiction and unreliable evidence for the existence of God. While I agree with Dawkins that the scriptures are not a reliable source of information regarding history (or even ethics, if read uncritically), I do see in the scriptures an inspiring rendition of humanity’s progressing understanding of and relationship with God. From the primitive beginnings of distinct separation between the human and the divine as slaves and masters, through servitude and childhood, and on toward friendship with and internalization of divinity, the scriptures speak to me of ethical and esthetic progress, and progressive atonement. Of course, for Mormons, we do not leave the matter there. The scriptures are only a start, and are not sufficient. No. We don’t even consider the Book of Mormon to be sufficient. Nothing short of both individual and communal relationship with and internalization of the divine is sufficient. That is evidence for God, as Joseph Smith put it (Doctrine and Covenants 88):

45 The earth rolls upon her wings, and the sun giveth his light by day, and the moon giveth her light by night, and the stars also give their light, as they roll upon their wings in their glory, in the midst of the power of God.
46 Unto what shall I liken these kingdoms, that ye may understand?
47 Behold, all these are kingdoms, and any man who hath seen any or the least of these hath seen God moving in his majesty and power.
48 I say unto you, he hath seen him; nevertheless, he who came unto his own was not comprehended.
49 The light shineth in darkness, and the darkness comprehendeth it not; nevertheless, the day shall come when you shall comprehend even God, being quickened in him and by him.
50 Then shall ye know that ye have seen me, that I am, and that I am the true light that is in you, and that you are in me; otherwise ye could not abound.

Dawkins proceeds to criticize what he calls “the argument from admired religious scientists”. Here, he basically suggests that most scientists are atheists. I don’t know whether that’s true, but I’m particularly skeptical when Dawkins makes this claim due to his demonstrated unwillingness to acknowledge many sorts of religious persons as being genuinely religious, and his demonstrated lack of familiarity with religions (and interpretations of religions) that do not conveniently fit into his simplified and generalized characterizations. I addressed this at greater length, with examples, in my first post. In any case, I agree with Dawkins that we should not consider appeals to authority, scientific or otherwise, to be sufficient arguments for the existence of God.

I’ll end with Dawkins’ criticism of Pascal’s Wager. Blaise Pascal once argued that it is better to believe in God because if you’re right then you’ll receive eternal reward, whereas if you’re wrong then it won’t matter. Dawkins notes that the argument fails for at least a couple reasons. First, one cannot force one’s self to believe in God. Second, God may not end up being the sort of being that rewards you for believing in him. Perhaps he would sooner reward you for honestly acknowledging your ignorance, or rather for acts of compassion without consideration of beliefs whatsoever. I agree with these criticisms, and will add that faith in God matters now only to the extent that it has practical consequence now. I like the way Brigham Young put it (Journal of Discourses 3: 336):

You may now be inclined to say, ‘We wish to hear the mysteries of the kingdoms of the Gods who have existed from eternity, and of all the kingdoms in which they will dwell; we desire to have these things portrayed to our understandings.’ Allow me to inform you that you are in the midst of it all now, that you are in just as good a kingdom as you will ever attain to, from now to all eternity, unless you make it yourselves by the grace of God, by the will of God, which is a code of laws perfectly calculated to govern and control eternal matter.

More of my thoughts on The God Delusion are on the way. In the mean time, tell me what you think!