Chapter Two of The God Delusion by Richard Dawkins 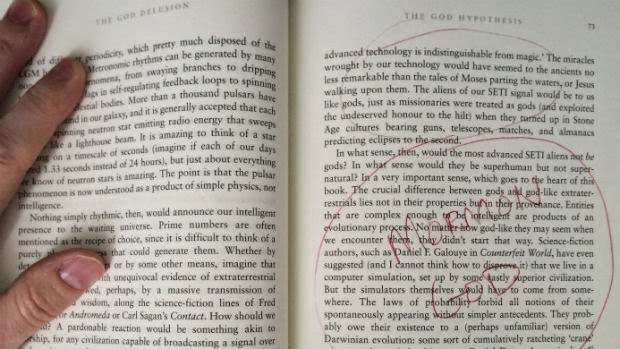 This is my second post reviewing the book, The God Delusion, by Richard Dawkins. The first post can be found here:

I should repeat some things mentioned at the beginning of my first post. I respect Dawkins as an excellent and inspiring evolutionary biologist. Although he misrepresents and misunderstands religion as a whole, he justifiably expresses anger and distrust regarding many particular aspects of religion. His view of religion is more black and white than mine; and, although sympathetic, I disagree with him. God is not always a delusion.

In chapter two, entitled “The God Hypothesis”, Dawkins begins by distinguishing between two views. He describes the first view, which he calls the God Hypothesis, in the following words: “There exists a superhuman, supernatural intelligence who deliberately designed and created the universe and everything in it, including us.” He describes the second view, which he explicitly advocates, in the following words: “Any creative intelligence, of sufficient complexity to design anything, comes into existence only as the end product of an extended process of gradual evolution.” These views overlap substantially, and where they overlap is precisely where one may find the God described in Mormon tradition and canon. Mormons generally understand God to be a superhuman designing intelligence that rose to such stature subsequent to eternities of progression. In other words, God was not always God, but rather became so. Moreover, Mormons generally do not consider eternal progression to be supernatural, but rather a natural progress toward states of being and capacities that we simply do not currently possess or understand, as illustrated by Apostle James E Talmage’s thoughts on miracles (Jesus the Christ 143):

Miracles cannot be in contravention of natural law, but are wrought through the operation of laws not universally or commonly recognized. Gravitation is everywhere operative, but the local and special application of other agencies may appear to nullify it as by muscular effort or mechanical impulse a stone is lifted from the ground, poised aloft, or sent hurtling through space. At every stage of the process, however, gravity is in full play, though its effect is modified by that of other and locally superior energy. The human sense of the miraculous wanes as comprehension of the operative process increases.

Throughout chapter two, the unacknowledged overlap between the two views becomes increasingly problematic. In the section on polytheism, he claims that he is “attacking God, all gods, anything and everything supernatural, wherever and whenever they have been or will be invented”, which means, despite the hyperbole, that he is not attacking all gods, since not all are supernatural. When faced with obvious overlaps between the views, he dismisses them, such as by claiming that “theology . . . has not moved on in eighteen centuries”, thereby implying that anything that accounts for modern perspectives must not really be theology, or by simply deciding that Buddhism and Confucianism should be treated “not as religions at all but as ethical systems or philosophies of life” because they do not fit conveniently into his characterization of religion. Unknowingly, he categorizes Mormons, whose canon explicitly rejects the immaterial, with agnostics by claiming that the following quote from Thomas Jefferson is “indistinguishable from what we would now call agnosticism:”

To talk of immaterial existence is to talk of nothings. To say that the human soul, angels, god, are immaterial, is to say they are nothings, or that there is no god, no angels, no soul …

Finally, at the end of chapter two, Dawkins arrives at the ironic climax of the unacknowledged overlap between the God Hypothesis and his advocated view of emergent creative intelligences. I circled the entire page and wrote in big red letters “MORMON GOD:”

Whether we ever get to know them or not, there are very probably alien civilizations that are superhuman, to the point of being god-like in ways that exceed anything a theologian could possibly imagine. Their technical achievements would seem as supernatural to us as ours would seem to a Dark Age peasant transported to the twenty-first century. Imagine his response to a laptop computer, a mobile telephone, a hydrogen bomb or a jumbo jet. As Arthur C. Clarke put it, in his Third Law: ‘Any sufficiently advanced technology is indistinguishable from magic.’ The miracles wrought by our technology would have seemed to the ancients no less remarkable than the tales of Moses parting the waters, or Jesus walking upon them. The aliens of our SETI signal would be to us like gods, just as missionaries were treated as gods (and exploited the undeserved honour to the hilt) when they turned up in Stone Age cultures bearing guns, telescopes, matches, and almanacs predicting eclipses to the second.

In what sense, then, would the most advanced SETI aliens not be gods? In what sense would they be superhuman but not supernatural? In a very important sense, which goes to the heart of this book. The crucial difference between gods and god-like extraterrestrials lies not in their properties but in their provenance. Entities that are complex enough to be intelligent are products of an evolutionary process. No matter how god-like they may seem when we encounter them, they didn’t start that way. Science-fiction authors, such as Daniel F. Galouye in Counterfeit World, have even suggested (and I cannot think how to disprove it) that we live in a computer simulation, set up by some vastly superior civilization. But the simulators themselves would have to come from somewhere. The laws of probability forbid all notions of their spontaneously appearing without simpler antecedents. They probably owe their existence to a (perhaps unfamiliar) version of Darwinian evolution …

“Eternal progression” is what Mormons call that (perhaps unfamiliar) version of Darwinian evolution. “God” is what Mormons call those god-like extraterrestrials that didn’t start that way. Whether we ever get to know them or not, there are very probably gods - at least, that’s what Dawkins is telling Mormons, whether he intends so or not.