Chapter Four of The God Delusion by Richard Dawkins 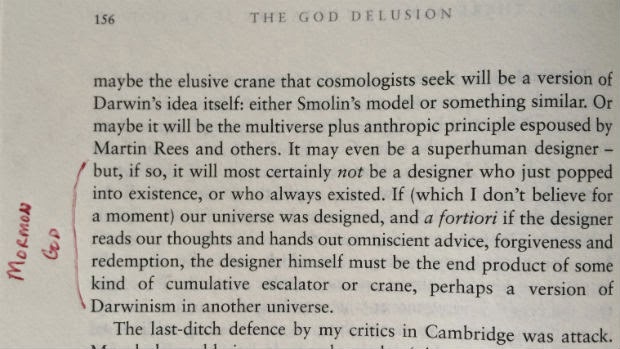 It’s time to get back to my review of Richard Dawkins’ book, The God Delusion. In this post, I’ll be sharing my thoughts on chapter four, entitled “Why there Almost Certainly is No God.” My previous posts, discussing the preface and chapter one, chapter two and chapter three are available at the following locations:

As before, I feel it is important to begin by expressing my opinion that Dawkins is an excellent and inspiring evolutionary biologist. Although he misrepresents and misunderstands religion as a whole, he justifiably expresses anger and distrust regarding many particular aspects of religion. His view of religion is more black and white than mine; and, although sympathetic, I disagree with him. God is not always a delusion.

Dawkins begins by acknowledging, as argued by intelligent design advocates, that the complexity of our world, the life forms in it, and the creations of intelligent life are incredibly improbable. We would not reasonably expect any of them, such as a Boeing 747, to appear in a scrap yard as the chance consequence of a hurricane. Dawkins then points out that we can explain the origins of such complexity via either intelligent design or natural selection - neither of which are chance. However, if we appeal to intelligent design then we should recognize that the designer must have been at least as complex as that which was designed. For example, an engineer is more complex than a Boeing 747. So if we appeal to intelligent design of the world then we should recognize that God, as the designer, must have been at least as complex as the world. This, of course, begs the question of how God came to be, and suggests that the chance existence of such a being is incredibly improbable - even more improbable than the chance existence of the world. Thus, as Dawkins suggests in the chapter title, there almost certainly is no God.

Yet, despite the incredible improbability of a Boeing 747, I’ve flown in one. I’ve met engineers who’ve designed such machines. They exist in all their incredible complexity! Really! Despite the improbability of complex systems and their engineers, we’re here. The title of the chapter might as well have been “Why We Almost Certainly Do Not Exist”. It would have been almost as accurate theoretically, and perhaps no more accurate practically. I’m not saying that Dawkins is wrong so much as I’m saying that he is over-emphasizing natural selection and insufficiently recognizing that both intelligent design and natural selection may have factored into the creation of the world. He only barely acknowledges this, as I’ll discuss further.

Before that, however, I’ll call your attention to a couple of Dawkins’ statements that particularly merit criticism. First, he suggests that “one of the truly bad effects of religion is that it teaches us that it is a virtue to be satisfied with not understanding”. While this may be true of some religions, it is certainly not true of all religions and therefore not true of the religious phenomenon as a whole. Mormonism serves as a counter-example, in that it emphasizes that salvation depends on knowledge - indeed, it is impossible to be saved in ignorance (D&C 131: 6). Second, he claims that intelligently designed organs would not demonstrate flaws, as do our organs, which must therefore not be intelligently designed. This is a poor observation, illustrating that Dawkins is better at science than engineering. Any trained engineer can tell you that designed systems demonstrate flaws, sufficient in number and consequence to justify numerous engineering jobs dedicated entirely to quality assurance - and, even then, engineers never identify all flaws, and generally fix only the most important subset of those that are found.

Let’s return to Dawkins’ arguments about probability. As the chapter progresses, he discusses the probability of the emergence of simple life, and contends that it is the most improbable aspect of the entire process by which humans came to be. He even goes so far as to state that “events that constitute run-of-the-mill evolution, as distinct from its singular origin (and perhaps a few special cases), cannot have been very improbable”. Consider the ramifications of this claim. This rhetoric positions most - nearly all - of the improbability of the emergence of intelligent life in the original emergence of the simple life form from which it evolved. An unstated implication is that the improbability of super intelligent life, such as a God, would not be much more than the improbability of human life, and the transition from human life to super intelligent life would be far more probable than the transition from no life to human life.

Dawkins then claims that, despite the improbability of the transition from no life to simple life, “we know it happened on Earth”. However, we simply do not know so much as he claims. We do not know whether that transition took place on Earth. It may have occurred elsewhere in our star system or galaxy. It may even have occurred outside our time and space, in a parallel universe. Who knows? It may NEVER have occurred, in our universe or elsewhere, if the history of evolution is an infinite regression.

Thus, Dawkins appeals to the notion of the multiverse to explain the initial emergence of simple life. He argues that if a very large number of universes exist, each with physical laws set to different parameters, then even if only an extraordinarily small percentage of them produce simple life then such would be sufficient for explaining human life. Sure, but he’s missing something.

What if simple life DID emerge, even just once somewhere in the multiverse? And what if that singular occurrence, as Dawkins himself argues, produced intelligent life as its probable (not improbable) consequence? Moreover, what if some of that intelligent life became highly intelligent to the point of being capable of producing new universes within the multiverse, but with specifications that interest them more than do the merely (or apparently) random universes within which they originally emerged? Perhaps they could, over time, increase the likelihood of generating universes with physical laws set to parameters that are most likely to repeat the occurrence of simple life? Such beings would be a sort of DNA for evolution on a cosmic scale.

It may be that the intelligent design of universes is not much more (if at all) improbable than the initial emergence of simple life in a multiverse. Moreover, if ever we (or our descendents) design a significant number of universes, either already charged with simple life or ordered for the emergence of simple life, then we almost certainly are already living in such an intelligently-designed universe - as presented in the Simulation Argument.

Dawkins almost acknowledges such a possibility by referencing the work of theoretical physicist, Lee Smolin. Dawkins writes: “Smolin’s idea … hinges on the theory that daughter universes are born of parent universes, not in a fully fledged big crunch but more locally in black holes. Smolin adds a form of heredity: the fundamental constants of a daughter universe are slightly ‘mutated’ versions of the constants of its parent. Heredity is the essential ingredient of Darwinian natural selection, and the rest of Smolin’s theory follows naturally. Those universes that have what it takes to ‘survive’ and ‘reproduce’ come to predominate in the multiverse. ‘What it takes’ includes lasting long enough to ‘reproduce’. Because the act of reproduction takes place in black holes, successful universes must have what it takes to make black holes. This ability entails various other properties. For example, the tendency for matter to condense into clouds and then stars is a prerequisite to making black holes. Stars also, as we have seen, are the precursors to the development of interesting chemistry, and hence life. So, Smolin suggests, there has been a Darwinian natural selection of universes in the multiverse, directly favoring the evolution of black hole fecundity and indirectly favoring the production of life.”

Yet if that’s true, then how much more successful within the multiverse would be universes containing life intelligent enough to produce more universes containing life! Advanced intelligent life can provide heredity at least as well as blackholes, and would presumably become much better at producing universes that survive and reproduce than would black holes that are incapable of observation and reverse-engineering. Moreover, because this most efficient form of universal reproduction takes place via advanced intelligent life, successful universes would need to have what it takes to produce advanced intelligent life. This ability would entail various other properties, such as interesting chemistry, stars, matter condensing into clouds … oh, and black holes. Indeed, it may be as Smolin suggests and Dawkins reports, there has been a Darwinian natural selection of universes in the multiverse, but directly favoring the evolution of advanced intelligent life! Remember that I mentioned Dawkins only barely acknowledges this? Well, here it is:

It may even be a superhuman designer - but, if so, it will most certainly not be a designer who just popped into existence, or who always existed. If (which I don’t believe for a moment) our universe was designed, and a fortiori if the designer reads our thoughts and hands out omniscient advice, forgiveness and redemption, the designer himself must be the end product of some kind of cumulative escalator or crane, perhaps a version of Darwinism in another universe.

I will go back to the beginning before the world was, to show what kind of being God is. What sort of a being was God in the beginning? Open your ears and hear, all ye ends of the earth, for I am going to prove it to you by the Bible, and to tell you the designs of God in relation to the human race, and why He interferes with the affairs of man. God himself was once as we are now, and is an exalted man, and sits enthroned in yonder heavens! That is the great secret. If the veil were rent today, and the great God who holds this world in its orbit, and who upholds all worlds and all things by his power, was to make himself visible - I say, if you were to see him today, you would see him like a man in form - like yourselves in all the person, image, and very form as a man; for Adam was created in the very fashion, image and likeness of God, and received instruction from, and walked, talked and conversed with him, as one man talks and communes with another. In order to understand the subject of the dead, for consolation of those who mourn for the loss of their friends, it is necessary we should understand the character and being of God and how he came to be so; for I am going to tell you how God came to be God. We have imagined and supposed that God was God from all eternity. I will refute that idea, and take away the veil, so that you may see. These are incomprehensible ideas to some, but they are simple. It is the first principle of the Gospel to know for a certainty the Character of God, and to know that we may converse with him as one man converses with another, and that he was once a man like us; yea, that God himself, the Father of us all, dwelt on an earth, the same as Jesus Christ himself did; and I will show it from the Bible.